The Birthday Gift is Back! #Summer #OutdoorSex #GroupSex

The Birthday Gift is the first story I wrote that was ever released as an ebook.  A small (now defunct) publisher called Dark Eden Press put it out back in 2008.  I've written about the extensive editing process it went through back then, and how much I learned about writing from my first editor, in a post you can read here.

The Birthday Gift has been through a number of revisions since that time, and now it's back on the market in all its small-town pansexual group sex glory. It's also available as a paperback for the first time ever! 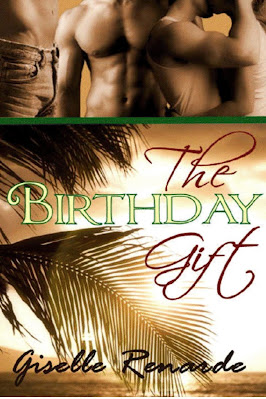 The Birthday Gift
by Giselle Renarde
Meredith is a cake-baking, apron-wearing small-town Canadian. Her guiding principle in life is, “What would June Cleaver do?” That is, until a curious set of circumstances cause her to crash an outdoor gathering where she stumbles upon a pair of delicious hunks getting a little hands-on with each other. Surely June Cleaver would have headed for the hills! Not Meredith. This relaxed get-together really heats up when one man’s wife appears on the scene... and encourages Meredith to join in!

Hot stuff! But the story’s not over yet. There’s still the tropical vacation, the confinement in foreign prison, the trial for freedom... and, hey, where’s Meredith’s husband in all this? It is his birthday, after all...

Find more retailers with the Universal Book Link: https://books2read.com/BirthdayGift
Posted by Giselle Renarde at 9:42 AM