What's so offensive about two men and a dog?

I want to show you something. It's a picture of two men and a dog: 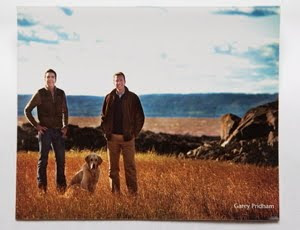 According to Canadian media outlets, this image sparked online outrage from the homophobic public.

The picture depicts Scott Brison, a member of Canadian Parliament, alongside his husband Maxime and their dog Simba. Like many politicians, Brison sent this image of his family out as his Christmas card.

"The overwhelming response has been very positive," said Brison, an out gay Liberal MP from Nova Scotia. "There's always a very, very tiny minority of bigots. It's their problem, it's not my problem."

According to The Canadian Press, Scott Brison and his husband Maxime feel they are warmly received wherever they go.

AND YET...(you knew there had to be more to this story, didn't you) after stories celebrating the Christmas Card showed up across online newsmedia outlets, comments sections have been shut down due to what The Globe and Mail's web editor called, "hateful and homophobic remarks."

It seems so bizarre to me. Living in Canada as an out lesbian, I have never encountered any negativity from anyone because of my sexual orientation. Never. Same-sex marriage is legal here. Scott Brison won his re-election by a landslide the year after he and his handsome Maxime got married. It doesn't seem like a simple Christmas card with two guys and a dog on the front would be problematic for people here.

Do we Canadians go online to let out our inner demons? Why on earth would newmedia web articles be bombarded by homophobic comments...and over a simple Christmas card? I don't understand it.

But, then, there's a lot I don't understand.

It'll give me something to ponder, I suppose, as I spend time with family over the holiday season. I hope everyone reading this will also have time to enjoy acceptance, celebration, and love with people they care about.