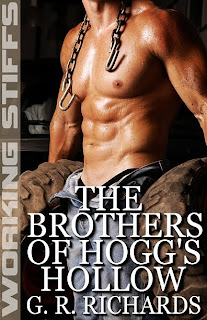 G.R. Richards: YES! When I was a kid my family did Saturday morning chores. We'd take on the house room by room and hit it hard. One week we were all in the living room and my parents were working end to end dusting all the knick-knacks along the mantle. Well, on top of the mantle we had a big mirror propped up. It wasn't attached to the wall, just leaning against it. That was problematic. I don't know if it was mom or dad, but one of them must have nudged the mirror in just the wrong way because it started falling forward. THAT was a slow-motion moment: knowing the mirror was coming down and it was going to crash and shatter and there wasn't a damn thing we could do to stop it. The mirror came down and the smash was spectacular. Nobody was hurt, but I watched the expressions of horror on my parents' faces, and that was another slo-mo event. I couldn't tell if they were going to start laughing in a second, or if they'd start screaming at each other. Thank God they laughed! Well, seven years bad luck, but nothing anybody could do about it, so why not laugh?

G.R. Richards: A third eye. I could use some extra insight.

G.R. Richards: Off the top of my head...I'd say...four. Not that there are monkeys on my head.

G.R. Richards: I love stories about families, especially supportive gay-friendly families. There are a lot of books about coming out and grappling with family dynamics in relation to one person's sexual identity. I prefer to write (somewhat fantastically, perhaps?) about other kinds of issues that arise within a family.

To Fernando, family means everything. He works as the brawn of his big brother Gerry's decking business, and he lives with Gerry's family. Nothing in life could make him consider leaving his flesh and blood...except Malcolm.

Despite Gerry's rule against fraternizing with clients, Fernando can't hide his attraction to "Professor Hottie," the young classics instructor who put himself through school working in construction. When Gerry takes an impromptu vacation to save his marriage, he leaves Fernando to babysit the kids and the business.

Malcolm lends an expert hand around the jobsite and helps out around the house, but can he convince Fernando to leave his brother's home and build a life together?

Posted by Giselle Renarde at 6:15 PM