For everyone who loves a good paranormal MMF ménage anthology,
"Taken" is a dirty and decadent treat! 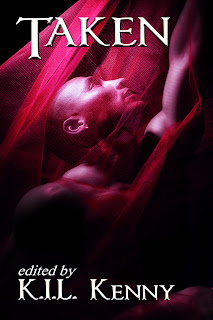 About Taken, A BBA Menage Anthology

The thrill of romance is something not too far from fear. The unknown sends a shiver down our spines, much more so when it's truly otherworldly.

In Josephine Myles' "In the Greenwood", woodland spirit Mirabelle falls in love with lonely artist Jay, but they cannot touch. She sets out to find Jay a friend -- and if she is brave enough, she might find something for herself, too. "Said the Spider to the Fly," by ND Drake, is about Elijah and Jamie, vampires and soulmates. When a woman sitting in a café captures Elijah's attention, Jamie is jealous, but soon discovers there is joy in the hunt.

In "Jolene," Giselle Renarde's heroine throws a bash to show off her new lover. When Wesley shows up with a boyfriend, all three are sucked into a situation beyond imagining. "Changeling," by JL Merrow shows that identities are fluid when Meg sets her heart on a boy who isn't who he says he is. Will the faerie queen unravel the riddle for the humans in her clutches?

Finally, in BA Tortuga's "Moasi," Tom has only weeks to live unless he accepts the offer of the mysterious healer Pax to abandon everything and find a cure. When Tom's wife, Jenn, shows up with divorce papers and a gun in hand, only Pax can guess how this scorned woman will ravish them all.

In Taken, five authors explore what it means to lose yourself in love.

About my story "Jolene"

Dolly Parton. We all know this song—it’s one of the greats—but have you ever heard “Jolene” covered by the White Stripes? Sorry, Dolly, but Jack White takes the cake! What I love most about the White Stripes’ cover is that Jack doesn’t bother with the old pronoun switcheroo we so often encounter in cover versions. Generally, a male vocalist singing a song like this one would change the lyrics to something along the lines of,

Jack White doesn’t go that route. He sings the song as written. He begs Jolene not to take his man. And, let me tell you, to hear one man singing with such affection and deep heartbreak about another is indescribably powerful. (And, since it’s indescribable, you can experience it for yourself by watching the White Stripes perform Jolene in concert on their website: http://www.whitestripes.com/video)

The idea of a woman stealing one man from another was the spark that inspired my MMF ménage story, “Jolene.” In writing, sometimes ideas go topsy-turvy, and at the end of the day I ended up with a male incubus stealing innocent Jolene’s boyfriend. Nevertheless, the spirit of Jack White’s performance stayed with this story to the end, and gave it a haunting edge.
Get your copy today -- ebook or paperback!
Hugs,
Giselle
Posted by Giselle Renarde at 11:55 PM