Third Rail: Is it strange to have a boyfriend and a girlfriend… in the same body?

Remember this one?  It's an oldie-but-goodie.

If Third Rail is new to you, GREAT!  You should buy a copy.  It's been off the market for a while, but it's back and better than ever. 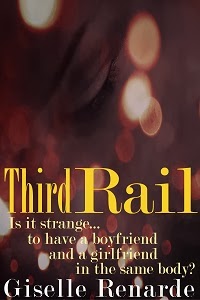 Is it strange to have a boyfriend and a girlfriend… in the same body?

Perhaps it is a touch unusual to have a girlfriend and boyfriend both living in the same body, but Kokoro doesn’t classify her relationship with Fiona and Martin as strange.

Kokoro rides the third rail, a dutifully submissive lover to both aspects of her genderqueer partner’s psyche. She goes home with Fiona at night and she leaves the house with Martin the next morning. In between, Kokoro discovers that the dynamics of domination and submission aren’t necessarily rooted in black leather. The emotional interplay, “this game of wills,” as Fiona calls it, is a greater aphrodisiac than toy-shop trappings.

“Don’t play this game of wills with me, Koko. You’ll never win.”

Fiona’s eyes blazed as she pinched Kokoro’s nipples. Oh, that delicious sting!  It urged an irrepressible cry from her lips. Only when Fiona released them did Kokoro realize she was standing on tiptoes. It took a breath or two before she came back down to earth.

“Hey, weren’t you supposed to kiss me?” Kokoro asked, leaning into the perfumed crook of her lover’s neck.

Fiona jerked her head away.

Kokoro tried again, tried for that tempting mouth. Every time her lips came close enough to lick, Fiona pulled away with a wicked glint in her eye.

Backing up, Fiona dragged a kitchen chair away from the table.  “Come over here. I’ll show you what you get.”

Posted by Giselle Renarde at 4:20 PM