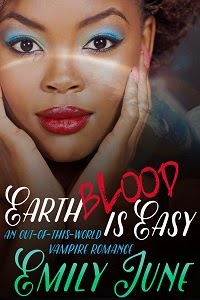 Remember a while back when I asked your advice about what to do with my vampire-alien romantic comedy?

Remember how I told you it was a funny little book, previously published in a box set that's now off the market?

My main concern was that I didn't want younger readers to pick up Earth Blood is Easy and then go looking for similar works by this Giselle Renarde person. I haven't written anything similar. It's truly one-of-a-kind.

Where did that name come from? Well, I asked my girlfriend, "What would be a good name to use?" and right away she said, "Emily." And I was all OoOoOo because that was exactly the name that popped into my head, too. Spooky, right?  As for June, that's a family name. It's also a pretty great month.

Alexxia’s stranded on Planet Earth without a blood source! When she meets a mysterious club owner, will she become too entranced by Earth’s underground vampire culture to leave?

Posted by Giselle Renarde at 9:59 PM