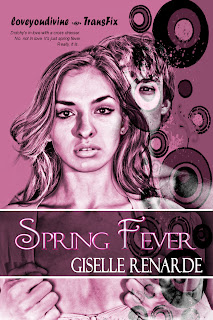 SPRING FEVER is special.
SPRING FEVER is a love story. I wrote it a few years ago, before my girlfriend Sweet and I started dating. I knew her as a "him" back then--an effeminate, quirky guy who attracted my attention, though I couldn't quite figure out why. It was a long while before Sweet came out to me as a MTF transsexual. In the meantime, I wrote SPRING FEVER.

Dotschy's in love with a cross dresser. No, not in love. It's just spring fever. Really it is...

After a rough break up, Dotschy doesn't want to think about love everlasting. When spring comes around and she can't stop smiling at Connor the sweet and sensitive semi-closet trans-curious sometimes-cross-dresser, she convinces herself it's just infatuation. That doesn't stop her from wanting him though. It doesn't stop her from getting him either.

Connor, dressed as a woman, stood before me in a light pink sweater with pearly plastic buttons down the front. It was the type of sweater a mommy picks out for her little girl. That’s the spirit in which Connor dressed himself. Sure, he had plenty of life experience as a man, but he was a novice female. His skirt was a more mature tweedy grey shot with pink, slit in the back and just covering his knees. Did he shave his legs? I couldn’t tell, what with the pantyhose. His shoes matched his sweater. His nails matched his sweater. Connor pulled off the look beautifully. He looked almost elegant in his black Kiss of the Spider Woman wig. His boobs were generous, but he had a natural paunch to match. Despite his height, he didn’t look curiously tall. He looked perfect, actually. His glasses were the same pair he wore as a man. They suited him both ways.

He leaned in close. Into my ear, he whispered, “Dotschy, you’re gorgeous.”

* * *
You can purchase SPRING FEVER today from loveyoudivine!
Or Buy Now from All Romance e-books!