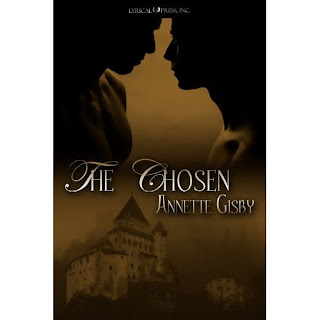 Ice-cream and a visit to New Zealand where were at a Maori Hangi and an American couple sitting next to us wanted to know what custard was and what flavour it was.

The day John proposed to me.

The Ring. It was a great film but I have never been able to watch it again, I had nightmares for weeks afterwards.

I'm terrified of needles so I wouldn't be getting any tattoo but if I did it would probably be something like a butterfly or a flower.

Monkeys aren't allowed on the bed ;)

Oh, that is a tough one! If pushed, I'd probaly have to say my m/m romance The Chosen, I fell in love with Severin and Havyn, but they're in love with each other ;)
Blurb:
Love or duty -which would you choose?
Prince Severin has been brought up to put duty before all else. Now, his duty is to marry and produce an heir. He has his choice of princesses. Unfortunately, his passion is for princes.
Havyn has been a slave all his life. When his powers are discovered, he finds himself purchased and freed by Prince Severin and apprenticed to the royal wizard, Ildar. His duty is to stay chaste to keep his powers strong. Unfortunately, his passion is for Severin.
With kingdoms at war, the throne hanging in the balance, and magic in the air, can the two men find happiness together, or is duty more important than love?

Ohhh...I love the cover for The Chosen. Lyrical Press--is that a Renee Rocco cover? She did The Birthday Gift for me back in the Dark Eden days. It's still one of my favourites.
Thanks for the interview,
Giselle Renarde
Canada just got hotter!

Posted by Giselle Renarde at 10:33 PM