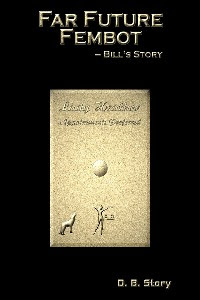 It used to mean a lack of chocolate in ice cream. Now it's a rich flavor of its own.

Driving south on I-805 in San Diego on a rainy night in 1977 when I shouldn't have been driving at all. Heading up the south side of Mission Valley in an Oldsmobile the front end of the car suddenly started to float. It quested back and forth a couple of times before I lost it completely. In a very long moment I did a full 360 in medium light traffic, to end up in the next lane to the right, engine stalled, facing up the hill still, untouched by any other car. Definitely the hand of God there that night.

No question about it: Alien.

Too many to count. Now will you please take them back.

6. Which of the books or stories you've written is your favorite?

No question about it: Far Future Fembot.

Here you'll find a romantic Valentine's story for the ages, and a timeless spiritual journey. Bill, a down-on-his-luck human, discovers Anna, an even more down-on-her-luck fembot, propped up in the corner of a secondhand store. Striking a deal with the shop owner to rescue her before she is sold and broken up for the value of her parts is the beginning of a relationship that will bridge centuries, lifetimes, political upheavals, and future forms of interpersonal relationships.

Warnings: This title contains humans and robots in a wide variety of sexual situations, including bi-gendered bot, oral situations and same-sex relations.

Ooh...a bi-gendered bot? Sounds neat! That reminds me of my story "The Travesties" which appears in Circlet Press' Like Twin Stars anthology. The Travesties, as sensationalist media and medical professionals dub them, experience gender as fluid, not only mentally and emotionally but also physically. Their bodies are capable of changing form at will, from masculine to feminine and back again. In a world that accepts only the black and white states of male and female, the Travesties are feared as a dangerous new race.
Thanks for the interview!
Giselle

Posted by Giselle Renarde at 9:52 PM