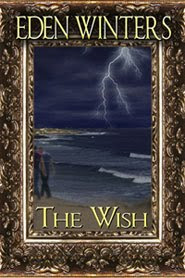 1. Hi Eden! Would you be so kind as to tell us what type of stories you write?

EW - Although the theme of my stories vary wildly, and I like to mix genres, all my writings involve two very different men who fall in love somewhere along the way. There is definitely sex, but it's not the primary focus. I prefer to think of it as tales that happen to feature gay men, and yes, those men have active sex lives.

EW - I'm revising some of my own work, but intend to relax and reread Heaven Sent 5 - Genesis, by Jet Mykles later.

3. I hear music in the background…what's playing?

Adam Lambert's For Your Entertainment. After the stir he made at the American Music Awards I wondered what type of artist he'd be, but the disk is wonderful. I love every track on it. He has an amazing vocal range, and sings soft, soulful ballads with so much emotion. Of course, you haven't lived until you've seen me perform the title song in my living room while cleaning.

EW - Labia. I live in an area where most men would think it was a some kind of car. Not the most enlightened of souls, I can tell you. I'm also very fond of saying, "Oh HELL no!"

EW - "Whatever!" I've never known that to be used in a positive manner. Also, "It is what it is." What the hell is that supposed to mean? It's not a bad saying unto itself, but I know people who use it at least twice per conversation. It gets really old.

Promo time! Flog your wares. Any exciting new releases? How can readers find out more about you?

Archaeologist Ian Lewis has an interesting hobby. He’s the captain of the pirate ship The Naughty Maid. With the help of a mysterious artifact, he travels back in time to save priceless treasures otherwise doomed to be lost forever.

His greatest treasure, however, wants to stay lost, or rather, deeply in the closet. Tired of the hiding the true nature of the relationship he shares with fellow archaeologist David Kane, Ian risks all on his partner’s love in a gamble that just may cost him his life.

My second is out in December, also from Torquere Press, called "Tinsel and Frost", a Christmas themed short.


My first ebook will be released on January 27, 2010 called "The Wish," also from Torquere Press:


Alex Martin is a spoiled rich boy who hides his loneliness behind a mask of aloof indifference. Paul Sinclair is a down-to-earth bookstore owner who insists on making his own way in life. Though they come from two different backgrounds, they have a common bond. Their uncles, Alfred and Byron, are partners in a law firm and in life.

When Paul’s uncle dies the two nephews rush to Alex’s uncle’s side, not knowing that it was Byron’s final wish that Alfred do everything in his power to unite the two.

The two men are initially hostile and full of misconceptions, and it will take the combined machinations of Byron’s spirit, the servants he can influence, and Alfred himself to let the two acknowledge the good in one another and their extreme attraction to each other.

If you'd like to try my work before you buy, I have a full length story "The Telling" posted at CRVBOY.http://www.crvboy.org/stories/ew/tt/c01.html

You can find me on the GLBT Bookshelf http://bookworld.editme.com/EdenWinters

I enjoy your site. Thanks so much for the interview!

Here's a fun word from the world of linguistics: tautology~a word or phrase defined in terms of itself. "It is what it is" is a tautology. So is "boys will be boys." I HATE that one.
As for "whatever"...yeah, in my relationship that's the word that turns a conversation into an argument. My girl can't stand it, and I only say it when I'm annoyed.
Ahh...words are fun! :-)
Thanks for the interview,
Giselle