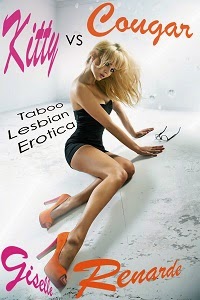 My latest, greatest new release is a little ditty called Kitty Versus Cougar, which you may remember from the taboo collection There's A First Time for Everything.

Kitty Versus Cougar is an Amazon exclusive, which means if you're a Kindle Unlimited subscriber you can read it FREE! If you're not, don't worry--it's only $0.99!

If you like lesbian smut, this one's for you!


Shelby dropped out of school the minute she turned eighteen, but life didn’t go the way she thought it would. Now she’s back in class, and it’s kicking her… butt. When Manon the sexy French supermodel offers to tutor her, Shelby lashes out verbally and then physically! Shelby sure acts tough, but can an educated older woman expose her inner pussycat?


Enjoy 7 paragraphs from Kitty Versus Cougar. We join Shelby and her father's girlfriend Manon as they're recovering from a scuffle in the kitchen:

Manon spoke first. She said, “It must be difficult for you, living here with your father. You are an adult. You are accustomed to having your freedom, to come and go as you please, to drink and smoke and make love.”

“Ha!” I couldn’t help laughing, for so many reasons. “I had way less freedom when I lived with my mom. Why do you think I came here?” Before she could answer, I added, “You and my dad think I’m some kind of badass who spent the last year and half having knife fights and snorting coke off some biker dude’s dick. Well, you’re dead wrong. I don’t do drugs, I only fight with my fists, and I wouldn’t fuck a guy if you paid me.”

Manon’s eyes widened and a tense moment passed before she said, “Your father did not tell me this.”

“My father doesn’t know,” I said. “Neither does my mom, but I think she suspects. I think that’s why she was always so hard on me.”

Subtly closing her legs, Manon asked, “You sleep with women?”

Manon’s long black lashes fluttered as she regarded me cautiously from across the room. This is exactly what happened with every other girl I had a crush on. Not that I had a crush on my dad’s girlfriend! No way. I hated her. But other girls, girls from work or wherever. After lusting from afar for ten billion years, I’d finally get up the nerve to go in for the kiss. Before my lips got anywhere near their lips, they’d swerve away and get all pissed off. Excuse me? They were the ones leading me on and then backing off at the last second. I should be pissed at them.

Posted by Giselle Renarde at 1:03 AM