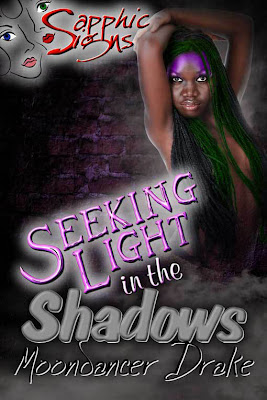 Seeking Light in the Shadows
by Moondancer Drake
Solanaceae has been fighting this war for a long time, determined to save the Fae homelands from the sickness infecting her people. She had always been so certain who the real enemy was. Man. Certain, that is, until she meets Maven. The Magi woman is fascinating and beautiful, but the secrets she reveals challenge everything Solanaceae has ever known. Maven warns of dangers in the darkness, dangers that threaten to devour both Fae and human alike. Dangers, Solanaceae is told she is destined to face.

Together she and Maven are Creation’s last hope for survival, but first Solanaceae must defeat her own hate before it consumes her. Will Maven’s love be enough?

I sat on the edge the bed, hugging myself around the waist. I wanted to believe she was right this time, that what he said didn’t mean anything. I wanted to believe that there was no Void, no great destiny. I wanted to believe that things could go back to being the way they had always been. The trouble was as a child of the sign of Aries, a creature of battle, of vengeance, I’d never had any use for lies. Now, when I wished it most, I couldn’t even lie to myself. “I don’t know what to do. I’ve always been so sure of things, sure of the truth, sure that I knew my place in the order of things. Now I’m not sure of anything.”

The bed jiggled as she sat next to me. “I can’t imagine what that’s like. I’ve always been one to question things, to doubt that what I knew was all I needed to know. Maybe I’m just more used to being in the dark about things, always seeking answers.”

“Seeking answers? Yeah, that was always my brother’s job, knowing things, researching, questioning.” My brother. Wasn’t he the one who said this was all crazy? “Now I don’t even know how to find out what’s true and what’s not.”

“You’re shivering.” Maven wrapped an arm around my shoulder and her warmth sent a deeper shiver through me. “I didn’t think your people felt temperatures like hot and cold.”

I looked up at her. Curiosity and worry mingled in her expression. My brother had been right about her kind. Those eyes, there was something not quite human there, something that called to me. I wish I knew the response. I wish I knew the right song, the proper chord, the magic thing that would make the perfect connection between my soul and the one that called to me from behind those eyes. “I’m an outcast, Maven. There always comes a loss of power with banishment. The price of disobeying the Courts. My people did not approve of my mission of vengeance. They demanded that I stop my visits to the surface, that I not fight the enemy I witnessed destroying the Fae. I refused. I knew what needed to be done. I knew who the real enemy was…” I looked down at my hands, hands that had been washed with blood more times than I could fully recall, and I found myself wondering. Had all the blood spilled by these hands been guilty? Could some have been that of the innocent tainted by the Void? Was there any way I’d ever know for sure?

Tender hands grazed my cheek, and then the other, wiping away tears as fast as they fell. I closed my eyes, allowing the grief this moment, giving myself permission to release what needed to fly free. I felt warm breath on my face, and before I could stop her, Maven kissed away a fresh tear. “No. Wait.”

I opened my eyes, and I could still see the wetness glistening on her lips. “My tears. They… they can have a narcotic, even a hallucinogenic effect on humans. I’m not sure what they would do to a Magi.”

“Not always.” I hesitated. Why did I care so much what she thought? Was I frightened she might turn away from me if I told her the truth? I had always been one to say what I thought, never holding back, never sugarcoating facts, so why did the words cling to my tongue now?

I drew in a cleansing breath, to steady myself before speaking. “As it is well known the Fae are tied to the land, but what many people do not understand is that there are more different types of Fae than there are stars in the universe. We could be tied to a particular animal, plant, stone, element, emotion, anything… and we are not just similar to that but we are borne of the spirit of that thing. For me, I am born from the heart of the nightshade and have been blessed and nourished beneath the Aries sun. There is poison in my blood, as deadly as the most venomous snake, in my tears… they are the mind-altering toxins of the nightshade herself.”

“I guess that makes you dangerous.”

Posted by Giselle Renarde at 12:47 AM