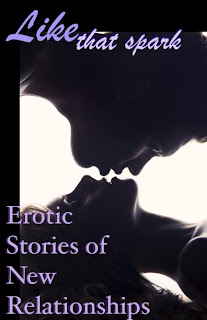 I forgot to mention I have a story in a great new Circlet Press anthology.

Like That Spark is a collection of short stories that explore the sensuality and eroticism of the moment when two characters finally realize they are meant to be together. These are tales of relationships and the beginnings of romantic and sexual connections. The stories here will challenge you and your notions of what constitutes a relationship in the first place. You will not find the common tame romance tale here.

Clear Sight in the Double Full Moon Night by Shawn Erin
A Balefire Chronicles Short Story: Poisonous Passions by Cynthia Gael
A Last Goodbye by Roxanne Rhoads
ToyGirls of the Personal Genome by Giselle Renarde
The Shock of the New by D Mark Alderton
Navigator by Kathleen Tudor
Passive Resistance by Josephine Myles

ToyGirls of the Personal Genome is a near-future cissexual/transsexual/intersex lesbian menage story. This story speculates on misuse of personal genomic information listed in a public index. In a near-future society where gender identity is no longer equated with genitalia, the trans and cisgender populations still hold privilege over intersex.

When twice-married, twice-divorced Roisin works up the nerve to visit a prostitute, she chooses Neo--a transsexual ToyGirl generated and farmed by a thief of the Personal Genome Index. At Neo's loft, Roisin meets Feather, Neo's intersex girlfriend who's been booted from the ToyGirls regime. In Feather, Roisin sees a twenty-year-old version of herself. She sold her personal genome to the Index years ago. Could Feather have been created from Roisin's stolen genome? Impossible! That would mean Roisin was born intersex too...

You can buy Like That Spark today! (Go for it! Whatcha waitin' for? It's great!)

Posted by Giselle Renarde at 10:58 PM