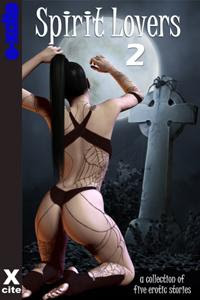 In all the time Marley's produced and starred in his web-only paranormal series, Ghost Hunting on a Shoestring, he's never encountered a spectre like this one! Lottie haunts the Widow's Walk of a New England house, where she waits for her lost-at-sea fiancé to come home. As Marley discovers, rumours of Lottie's despair have been greatly exaggerated. She wants a man – any man – and this girl takes what she wants!

Alcina and Estra are ready to enjoy everything Halloween has to offer them – food, fun, and, most of all – the pleasures of the flesh. After enjoying each other’s bodies for hours they decide it’s time to find a man. Luckily for Michael he’s the one that happens to cross their path. After quickly deciding that he is exactly what they were looking for, they convince him to take them back to his place for a wild Halloween ménage ‘a trios. He ends up getting more than he bargained for with a sexy, but shocking, Halloween surprise.

Sally can't seem to forget her old lover. Maybe it’s something to do with the day he jilted her at the altar. Something makes her journey back to the same old church every year to try and exorcise her demons. But for Sally, a mysteriously warm evening and a careless stroll through the eerie churchyard catapults her into a sinister world she had never imagined, one which co-exists on the fringes of our own. The extraordinary and unsettling lover she encounters there offers her delights she can only dream of, but what does he expect in return…?

The Victorian washstand is a real bargain, but Ros never wonders why it might be quite so cheap – until she's woken by splashing noises in the middle of the night. Soon she is being visited by a ghostly figure with an exhibitionistic streak. But who is he – and how far will Ros have to go to grant him the release he craves?

An accomplished but plane-wrecked aviatrix, stranded on a desert island, would have a bleak sex life – one would imagine. But as all hopes of her rescue fade, naked in a leafy glade, she finds solace among the branches of a strange tree surrounded by exotic mushrooms. And who could resist toying with and sampling mushrooms shaped like … that?

Her waking relationship with the tree, its soft boughs and her playthings become woven into increasingly vivid dreams of a Viking invader. The mighty Bork and his longship crew are on an eternal quest to ravish her, until finally, reality itself is called into question.

You can buy this great collection directly from Xcite, from All Romance ebooks, or from Amazon!

Posted by Giselle Renarde at 6:51 PM