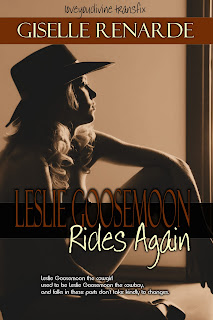 New to the rodeo experience, Dina doesn't understand why the biggest star on the circuit is despised by all. When she runs a search on the rodeo champ, it all becomes clear: Leslie Goosemoon the cowgirl used to be Leslie Goosemoon the cowboy, and folks in these parts don't take too kindly to those people. The town's intolerable ignorance drives Dina to seek out Leslie at her modest cabin, where desire is sparked by enlightening conversation, dusty jeans, and a refreshing shower in the great outdoors.


“Leslie? Leslie Goosemoon?” Dina cried, chasing after the rodeo champ. “Wait up, will ya?”

The remarkable rider stopped in her tracks twenty meters ahead, and Dina slowed her gait from a gallop to an amble. It felt like a good five minutes before the mysterious stranger turned her head. Even when she did, the brim of her tawny cowboy hat obscured her eyes until she took it off to wipe dusty sweat from her brow.

Dina’s blood ran cold. She wasn’t anticipating such piercing blue eyes on a rough and tumble rider. Her eyes should be brown like the mud spray across her cheek.

“Hi,” Dina began, forgetting why she’d chased her down in the first place.

“Whaddya want?” the rider grumbled, her quick-draw stance keeping Dina at a distance.

“It just seems strange that nobody came to congratulate you. All the other girls in competition have their legions of fans. Here you’re the big winner and you’ve got no one telling you how great you rode today.” Dina tried to sound casual, taking a tentative step forward.

With a shrug, Leslie Goosemoon replied, “Lots of folks on the circuit could do without me.”

“Well, of course they could; if you weren’t around, those other girls might have a chance in hell at winning. Do you always ride like that?”

Another shrug, and a fraction of a smile.

“That so?” Leslie asked, raising an eyebrow.

“Yup.” Silence made Dina nervous, so she filled it. “My roommate’s boyfriend, Rod the Clod, commandeered our TV during the Calgary Stampede last year. I never liked cowboy stuff before that, but when you’re subjected to something night and day…”

“Exactly. Although, I never did warm up to Rod the Clod.” Dina hesitated, but what the hell. Nothing ventured, nothing gained. “I probably hated him so much because that rat bastard totally crushed my chance to get with Vicky. Hard to make a move with him on the couch twenty-four-seven.”

With a wolfish smile, Leslie gave her a blatant once-over. “You lookin’ to get over Vicky?”

Dina shrugged, meeting her penetrative gaze straight on. Leslie took two steps closer. In one fluid motion, her arm swooped around Dina’s waist and a dusty hand brushed through her hair, firm against her scalp. Those pink lips hovered like Tantalus’ water glass, so close she could nearly sip them.

“Best way to get over someone is to get under someone.”

http://donutsdesires.blogspot.com
Posted by Giselle Renarde at 1:45 AM