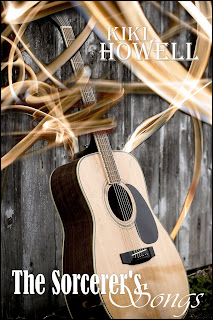 Simple Comfort Food! My son and I used to have a joke that involved a line from a TV show about 'plain vanilla' which has always been his favorite milkshake, ice cream, pudding etc. Great, easy summer vanilla recipe we love:
SAND
Make one package of instant vanilla pudding according to package directions. Add a small container of Cool Whip. Put in small sand bucket bought for this purpose :) Cover top with crushed Nilla Wafers. Serve with a sand shovel. Optional - decorate with sea shell chocolate candies.

That is how I remember all hugs.

The last few minutes of Stephen King's The Mist - there was just no reason for that :(

One like the intricate, exotic swirl designs the vampires get on their faces in the PC Cast, House of Night series.

My favorite is The Sorcerer’s Songs which I wrote using my husband's song lyrics to create the plot. It was a lot of fun to write, and a great writing exercise! I think I was so inspired by his music that the story practically wrote itself.

Go to http://www.broadjam.com/player/player.php?play_file=23955_260044 to listen to the song that inspired the story called "The Road" from Steven's "Weathervanes" CD.
BLURB:
If I knew then, what I know now
I’d like to think I’d choose a different way to go
But, my mistakes have paved the way
Down this dark and lonely, dead-end road
Poised on a stool in a corner of yet another bar, in front of a crowd of maybe fifty, the harmonies he played reached out to those around him. The rhythms in his head stirred his heart. For a man of magic, a sorcerer with powers he had never asked for, his musical talents were sung spells. They were his weapon of defense against loneliness, bringing people to him like a siren’s song. Yet, for the most part, he let his music haunt the deeper needs of those who listened—letting musical phrasings stir wants unnamed or purposely forgotten. Although he felt but a living and breathing jukebox, these strangers who came to see him play were the only lives he could touch. He reached out to them with his songs.
That is until one night one of Adam’s songs lures him back toward his hometown, and he calls out for Stacey, the one he was forced to leave behind all those years ago. Only this time she wants answers as to why he left, and maybe a bit of revenge for the heart he destroyed.
Buy Links:
eBook - http://fidopublishing.com/store/catalog/product_info.php?products_id=40&osCsid=1943711e4d71b25718f7666a18e43193
Trade Paperback with or without the CD - http://www.kikihowell.com/2010/06/sorcerers-songs-trade-paperback-novella.html

* * *
Wow...there are just way too many Simpsons jokes in this interview: Homer's donut-stealing helper monkey, Ned Flanders's ice cream preference of "plain vanilla with nothing on it"...well, I guess that's it. I thought I had a theme going.

Thanks for the recipe! That is too cute...and I love the idea of literally shoveling pudding into my mouth. That's going straight to the top of my fantasy list! (Mmm...pudding...)

Here's a slow motion hug for you, Kiki: HUGGGGGGG!

Thanks for the interview,
Giselle

Posted by Giselle Renarde at 11:09 PM