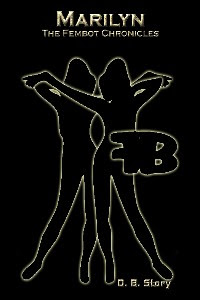 In keeping with this week's lesbian theme, D.B. Story has sent me a blurb about "Marilyn" which is COMING SOON to eXcessica Publishing! Who loves sci-fi?

Once we start building robots we will be able to build them in any form we wish, and we will do exactly that because it will help sell them. Unfortunately, in the same way that fame has always brought burdens to those it grants its graces to, it will also bring unique challenges to those built in that image. (Note to buyers: This story is also contained in the anthology: The Fembot Chronicles—Volume 2, available in e-book and print. In the same way that iTunes sells individual tracks off of an album, individual stories are available without the need to buy the entire anthology.)

This man had wanted his Marilyn to be a faithful reproduction of the century-old sex goddess she was modeled after, right down to her personality. All available records were analyzed in the crafting of her behavioral programming. As a result Marilyn was as close as possible to the woman she was intended to represent—flaws and all.

And that was a disaster.

From the first day with her first owner, Marilyn could never be what he wanted from her. He wanted what he saw in the old movies to be present and serve him at all times. Marilyn couldn't give him that with what she had been given to work with. Even the real Marilyn had never been able to deliver on that promise in real—as opposed to reel—life.

When that failed he tried to remake her through nearly constant use of the COMMAND button on her remote, which was never intended for fully reprogramming any robot. He only succeeded in introducing even more conflicts into Marilyn until she was close to complete system failure due to her inability to fulfill her function and satisfy her owner.

One day during a particularly heavy-handed use of her remote that remote began to fail, possibly from overuse. Its intermittent operation was worse then even continual use had been. As Marilyn was being jerked in and out of her command mode she suddenly heard herself say, "If you could just keep your finger off that damn button for a minute, maybe I could sort out what it is you really want me to do!" It was hard to say who was more surprised. Her owner—or Marilyn herself!

In the stunned silence that followed, and free for a moment from the control constantly interrupting any thought she might have had before she could complete it, Marilyn searched her systems to figure out what had happened. She quickly realized how she had just made her own first decision to attempt to understand herself, and how she could do it again. She used this new ability to access her recent thoughts and came to comprehend where she had been attempting to reconcile her owner's impossible demands against her core personality. In the process Marilyn discovered an audit trail of unauthorized adjustments to her systems that had quietly been made by her struggling mind to try and make it all work out—attempts that she hadn't been conscious of until this moment.

Marilyn's core commands required her to run a diagnostic if there were ever any question of her malfunctioning. It would automatically shut her down if it detected too much deviation from her core programming until she could be properly repaired.

Marilyn didn't run that diagnostic. When she assessed her recent actions, all of them were attempts to remain consistent to the requirement given her to be Marilyn. All were necessary to achieve this goal. The conflicts in her system had finally resolved themselves by giving her much greater leeway over how to fulfill the demands placed upon her. She decided the diagnostic was not necessary under this circumstance and disabled it from running without her explicit permission.

This sudden shift in relationship dynamics created an unexpected power vacuum. Despite struggling internally to grasp just what had happened to her Marilyn was by far the quicker thinker of the two. And her personality was full of knowledge on how manipulation of others worked—both what she could do, and what had been done historically to her namesake. Her next decision was to step into the vacuum before it disappeared again.

"Let's try this," she told her owner, stepping forward and taking his arm. He didn't resist as she led him down the hall to the bedroom for something that would distract him for a while—and that she could do without further direction from him.

You can read more at http://excessica.com/store/catalog/product_info.php?cPath=28&products_id=437

Thanks to D.B. Story for the excerpt!

Posted by Giselle Renarde at 1:19 PM