Festive Frenzy: An Angel for Christmas by Lily Grace 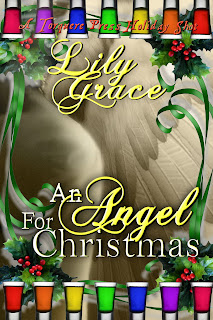 Title: An Angel For Christmas
Author: Lily Grace
My Website: http://lilygracetales.blogspot.com/
Buy link: http://www.torquerebooks.com/index.php?main_page=product_info&products_id=2970
Blurb:
Sebastian has done the one thing a guardian angel is never supposed to do. He’s fallen in love with a mortal. When his human falls into serious jeopardy, Sebastian descends to Earth without permission. Kevin’s bartending job just doesn’t pay enough, his mother's hospital bills keep piling up, and now he’s borrowed money from the wrong person. He needs a miracle this Christmas season. Kevin just didn’t expect it to come in the form of an actual angel. Not caring that he's breaking all the rules that govern guardian angels, Sebastian helps Kevin all he can. But the consequences of Sebastian's actions could be dire for the angel, unless Kevin can perform a miracle of his own.
Excerpt:
Sebastian's eyes widened. He wasn't sure who was more shocked, he or Kevin. He hadn't meant to lower his guise of invisibility, but now it had happened twice in one night. Kevin distracted him. Sebastian had never been able to be this close to Kevin before. He had always had to look from so far away. The proximity overwhelmed him. He knew he had crossed too many lines to count back in the alley, but his punishment would be worth it. Watching Kevin sleep, being so close, knowing his mortal charge was safe... it was worth everything.

"Please, do not be frightened!" He held up his hands, voluminous sleeves falling down his arms to his elbows. "I mean you no harm." There was no going back now. No point in disappearing. The damage had been done.

Waves of terror and confusion washed over Kevin's face. His eyes were wide and blinking rapidly. Sebastian understood this would be difficult for him to understand. He waited patiently, giving Kevin a few moments to collect himself.

Kevin's hands came up to his face and rubbed furiously at his eyes. Sebastian smiled when Kevin looked surprised that he was still there. Kevin had beautiful eyes. They were so unusual. Blue-gray, like Cape Cod after a storm.

"Y...you're not real. I'm still dreaming." It came out as a statement.

"I promise you are awake." Sebastian tried to make his voice as gentle as possible.

"Who are you?" Kevin's voice was edged with astonishment and a small amount of fear. He pushed his back flush against the headboard and gripped handfuls of bedding tightly.

Sebastian took a chance and moved slightly closer, trying to offer reassurance with his smile. This was where Kevin would need to suspend disbelief and have a little faith.

"My name is Sebastian. I am your guardian angel."

Kevin's hands once again went to his face, and he sighed deeply. At least he didn't look frightened anymore.

"This is a dream. I'm not crazy, and there are no such things as angels." He spoke more to himself than to Sebastian. "I'm going back to sleep. When I wake up, you won't be here."

Kevin reached for the bedside lamp, and once again the room was bathed in darkness. Burrowing under the covers, Kevin pulled the quilt up over his head as if that would make everything go away. Sebastian didn't blame him. Not really. Everything Kevin had been taught had told him that Sebastian couldn't be real. Sebastian still found that it hurt, though. He wanted Kevin to believe... needed him to. Hopefully things would be better in the morning. Sebastian wasn't going anywhere.

Sebastian moved to a sitting position near the end of the bed, keeping vigil over his charge until morning.
Buy link: http://www.torquerebooks.com/index.php?main_page=product_info&products_id=2970
Posted by Giselle Renarde at 10:29 AM