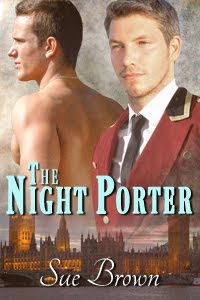 The Night Porter
by Sue Brown
Bittersweet Endings at Dreamspinner
http://www.dreamspinnerpress.com/store/product_info.php?products_id=2071
Blurb: The first time Max lays eyes on Robert Armitage, he knows exactly what he wants to happen. Tall, broad, and gorgeous, Robert pushes all his buttons. When Robert asks Max to show him around town, the attraction between them only intensifies. But Max is just a night porter and Robert a guest at his hotel before his wedding, and Max knows even as they sleep together that in the morning he'll have to send the groom on his way.