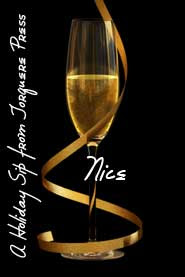 Tinsel and Frost by Eden Winters

How Tony'd dreaded this moment, this sealing of his fate. With his first step onstage he was officially a stripper, hammering the final nail in the coffin of a once promising career. Instead of twirling a tiny female in an off-Broadway production while dressed as a swan, he was slowly peeling off a skin-tight T-shirt to reveal his freshly shaved chest in a strip club, way, way, way, way off Broadway. So far off Broadway that it would take a good long trip by car to get there.

Rude shouts of, "Take it off, baby!" brought him back to his sad reality. He wished the men were quieter so he could at least pretend to be on stage in some major city, performing for a more refined audience. In retaliation he dropped to the floor in a full split, inspiring groans of imagined pain from his all-male spectators.

Smoothing his hands down the legs of his costume, he discreetly thumbed open the side fastenings and rose smoothly, leaving the pants behind. A casual kick launched them toward the curtain for the stage hand to retrieve. Grasping the pole once more, he spun himself around, giving those closest a gratuitous view of his ass, exposed by a skimpy, flesh-colored thong. His only other clothing, if it could be called that, was a silk wrap on his calf, hardly visible in the low light. If anyone noticed it, they'd just assume it was part of his costume. That is, if anyone even bothered to look beyond his crotch or his ass. Lower and lower he wound around the pole, fighting tinsel the whole way, finally ending up back on the floor in a pile of cheap, glittering plastic.

Once more visualizing himself a sleek predator stalking prey, he held onto his shredded dignity as tightly as he could while crawling on hands and knees to the edge of the stage. Schooling his features into what he hoped was a seductive, confident smirk, he focused on those likely to be big tippers. He paused a moment to search out the bouncers. Ah, there they were in all their muscle-bound glory, one at either end of the stage, ready to step in if he gave the signal. Confident that he was protected, he slowly moved closer to the fists waving dollars in his direction.

The paper being shoved into his skimpy garment tickled and scratched. He tuned it all out, keeping his eyes carefully on the customers' chins so he wouldn't see the lust in their eyes. If he didn't look, he could more easily imagine that he wasn't the piece of meat they saw him as. Groping hands traveled down his flanks and he turned what he hoped was a playful expression on the offender, wagging a finger. That was the first warning. The customer would only get one more before the bouncers escorted him out. At least that much he could say for this club: they took care of their own, unlike some of the other places he'd auditioned for.

Movement out of the corner of his eye caught his attention. An older, graying man held up a twenty. Tony smiled seductively, crawling toward him, regretting that he hadn't turned his eyes away more quickly. Bile rose in his throat at the man's superior sneer. That look said, "I could pay for you; you're just a whore." Although he knew it wasn't true, it still stung that others thought so. Swallowing the remnants of his dignity, he reminded himself that it was a small price to pay for the twenty that was going to be stuffed into his thong. At the last minute the man slipped the twenty back into his pocket, throwing back his head and laughing. That one sound drowned out the music, the bawdy comments, everything. It grew louder and louder, until it was all he could hear. Tony's cheeks flamed in embarrassment, and he fought to keep his body moving to the beat when all he really wanted to do was run away and hide in shame.

Suddenly a hand grabbed his hip, pushing him down while invasive fingers wriggled beneath his scanty attire and jammed brutally against his hole. Tony whirled on his attacker, only to find, man, hand, and fingers gone. Through the harsh glare of lights he saw the crowd scrambling out of the path of a bouncer, the big man dragging the offender across the floor and into the office.

A warm hand caught his arm and Tony jumped back in alarm, expecting another sweaty, leering face. Instead he saw his own reflection mirrored in a pair of dark glasses. Staring up at the bouncer who looked to be carved from ice, Tony could easily imagine how he'd gotten his name: Frost.