Festive Frenzy: The Match Before Christmas by Eden Winters 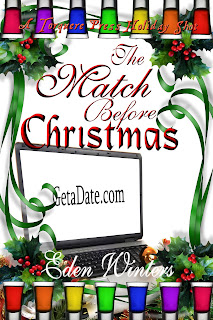 The Match Before Christmas by Eden Winters
Link:
http://www.torquerebooks.com/index.php?main_page=product_info&manufacturers_id=293&products_id=2973

Candlelight, mistletoe, gaily wrapped packages beneath a trimmed tree, and someone to share it with. That’s all contractor Barry Richards wants for Christmas. Desperate for a traditional holiday, he takes drastic measures. Creating a profile on “GetaDate.com,” he hopes to find the perfect man in a matter of weeks. When one date after another goes sour, while all around him friends are falling in love, he starts to lose faith.

The first snows begin to fall and the world is filled with seasonal cheer, all except for Barry, for whom time is running out. Facing the prospect of a lonely holiday, he tries just once more to make The Match Before Christmas.

It took a full week and lots of careful screening before he was ready to try someone suggested by the dating service again. Bobby was a bit younger than Barry really wanted, twenty-two, but they shared a lot of the same interests. They met at a coffee shop downtown, followed by a movie, an action-adventure thriller. This date was quiet, saying more with expressions than with words, and very touchy-feely, which didn't bother Barry at all, being a cuddler at heart.

When the lights went down in the theater, Bobby laced his fingers with Barry's, holding on throughout the film. Barry found it sweet. Afterward, Bobby suggested a favorite Chinese restaurant. Things were going fine until, "Jeff used to bring me here."

"Oh." While Barry would never dream of mentioning an ex on a first date, Bobby was young and probably didn't know better.

Barry ordered sweet and sour chicken. Bobby sniffled. "That was Jeff's favorite, too." Unshed tears filled his eyes. If he'd left it at that, they still might have had a chance. However, Jeff's name came up when Barry ordered green tea, requested extra sweet and sour sauce, and even when Barry said Bobby's name.

"Jeff used to say my name like you do."

Huh? How many ways could one say, "Bobby"?

The coup de grâce of the budding acquaintance occurred when, after four hours together, Bobby asked, "What was your name again?" Barry started to say "Jeff" for spite. At least that the guy could probably remember.

At the end of the meal, Barry's curiosity finally got the better of him. "What happened to Jeff, if you don't mind my asking?"

"Oh, he was found beaten to death in his apartment a month ago. But don't worry; I've been cleared as a suspect."

Posted by Giselle Renarde at 11:11 AM