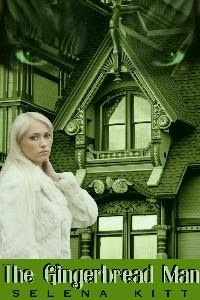 Blurb: Lindy runs into an unexpected snow storm on the way to her fiance’s on Christmas Eve, but will the charming, kindly gentleman who comes to her rescue turn out to be more saccharine than sweet? Note: This story originally appeared in the anthology Shivers
Excerpt:

The exit ramp was steep and curved dangerously down to the right. Lindy crept forward as slowly as she could manage. She stopped at the stop sign, looking through the white haze for a gas station. There was one to the left and she turned onto the little two-lane road, inching along the slippery pavement. There were no cars anywhere, and it wasn’t until she was nearly on top of it that she realized the gas station’s lights were out, and there were no cars there, either.

She eased the Corvette up to the front of the building, reading the sign in the window: “Closed for Christmas.”

“It’s not Christmas yet,” she grumbled, trying to see into the distance. Was there a gas station the other way? The car fishtailed again as she pulled out of the parking lot and Lindy swore, turning into the swerve, just like Robert had taught her. The rear end corrected itself with a little shimmy and she breathed a sigh of relief as she headed back the other way, searching for the familiar markings of another gas station.

The road stretched on in the gray afternoon light, the few houses and wide fields on each side blanketed with snow. She carefully re-set the odometer, deciding to go a mile from the highway to see if she could find something, even a little party store with a pay phone. If she weren’t in such a hurry to get to Robert’s for Christmas, the drive down the little two-lane blacktop might have been enjoyable. The scenery was beautiful, the trees overhanging the road creaking under the weight of the snow. It was the thick, heavy stuff, the kind that muffled the world and covered it like some kept secret.

Lindy kept her eye on the odometer as she crept along, seeing it nearing the mile mark. So far she had only seen a smattering of houses interspersed among the snow-covered fields and nothing in the way of a store or gas station. Should she turn around? She wondered. The snow seemed to be easing up just a little. Maybe she should get back on the highway and drive to the next exit?

Up ahead on the left she saw a house decorated with Christmas lights, the front walk lined thickly with candy canes all the way up to the ornately carved front porch. It was a Victorian style home, something Robert really would have appreciated with his eye for architecture, with all the curls and spires and cupolas that went along with it. Lindy smiled, and thought of how she would relay this whole experience to Robert.

She would tell him how quaint and beautiful her little side trip was when she was tucked up safe and warm in his arms in bed tonight, the anticipation of the announcement of their engagement to his family the next day curled into a tight little ball in her stomach. She glanced down at the ring on her finger glinting in the gray light, even without a hint of sun, lost in the thought about the man who had put it on her finger.

That’s why she missed seeing the wolf in the road before it was too late.

It was standing in the middle of the blacktop, teeth bared, hackles raised, its eyes two glittering points, staring straight at her. Lindy screamed, knowing her first impression, that it was a wolf, was mistaken as she turned the wheel to avoid a collision, seeing it briefly out of her driver’s side window. It was an enormous husky dog, its fat tail curling high as it ran, disappearing into the ditch on the other side of the road.

She had time to curse Robert’s choice of vehicle and her agreement to pick it up from storage and drive it up to him—but just barely. The Corvette spun over the road like a top and she braced herself for impact, turning the wheel uselessly, her foot on the brake doing nothing but locking the tires into place. The car slid sideways, down into the ditch opposite where the dog had disappeared, and came to jerking halt.

Her first thought was Robert was going to kill her if anything had happened to the car. The embankment wasn’t steep and in spite of the abrupt stop, she didn’t think she had hit anything. The rear-end of the vehicle was angled into the ditch and she checked her rearview mirror, but all she could see was white powder and the waft of exhaust. At least she wasn’t buried in the snow.

Lindy took a deep, shaky breath, easing her foot gently off the brake. She had been pressing her foot down so hard it ached from the effort. Nothing happened. Giving the car a little gas, she waited for it to jerk forward, but again, nothing happened.

“Come on, come on, come on.” She pressed her foot down on the gas pedal, hearing the sound of the tires spinning in the snow. “Please.”

It was no use. Sighing, she reached for her cell phone, flipping it open. It read “Low Battery” in the window still. She flipped through her “contacts” and found the eight-hundred number for AAA. Surely someone would be working, even on Christmas Eve? If the phone would work for just a few minutes…

“Please.” She pressed the “talk” button and waited. Ringing! She sighed in relief, closing her eyes and leaning her head back against the seat.

A rapping on her window made her gasp and jerk her head up. She flicked the window lock and pressed the button, waiting as the glass slid down, revealing a man in a long, wool coat, pulling it closed against the snow and wind. He wasn’t wearing a hat and his salt and pepper hair was covered in a melting sheen of snow that was replaced by new flakes almost immediately.

“You need some help, miss?” The man bent his tall frame in to peer at her. “I saw you spin out. I live across the road there.”

“Oh yes, thank you so much!” Lindy sighed in relief. “If I could just use your phone…”

She rolled up her window as she struggled with the door and the man helped her pull it open through the drift of snow. They were only able to get it halfway and the car was at such an angle he had to grab her arm to keep her from falling as she stepped out. She gave him a grateful smile, glad she had worn her sensible boots. Ever practical, she reached back in to grab the keys and her purse.

“I can’t thank you enough!” She closed the door and locked it. “My cell phone died and I didn’t know what I was going to do.”

“That was some spin-out.” He shook his head, holding her arm as they carefully crossed the icy pavement. “You’re lucky it wasn’t worse.”

“I know!” Lindy let him help her as they walked carefully down the road. “That’s the second time tonight… I should have just stayed home.”

They trudged up the street, both of them hugging their coats around them, heads down to the wind. The snow, which Lindy had been sure was going to ease up, had resumed in full force, and she turned her collar up to it. It wasn’t until they reached the walkway that she recognized the house, the old Victorian all decorated for Christmas.

There were so many lights on the house, it was like a beacon in the gray afternoon. Rows of red and white peppermint candies with lights in their centers lined the huge wraparound porch and each window as well. Fat multi-colored lights rimmed the roof and each ridge and cupola like Jujubes. Candy canes as tall as Lindy lined the walkway, each less than a foot apart, and she smiled up at the sign hanging over the door: “The Gingerbread House.”

“I won’t meet an old witch inside waiting with a hot oven, will I?” she teased as the man helped her up the stairs.

He flashed her a brief smile as he opened the door. “Not unless your name is Gretel?”

“No, I’m Lindy.” She laughed, following him. The house was warm and inviting, but it was the smell she noticed first, the sweetness of baking, something like cake or cookies.

Posted by Giselle Renarde at 3:01 PM