Get your copy of Giselle's Best Fetish Erotica today (it's FREE!)

Call me irresponsible.  Call me unreliable.  Throw in undependable too...

I've been incommunicado of late, and I feel terrible about it.  I usually publish often and tell you all about it.  Recently, I've been working on anthology contributions and not telling anyone.  I've also been out of my apartment a lot due to noisy construction. Apart from fraying my nerves, that also means I'm not able to spend much time communicating with readers.

So what have I been up to lately?

This weekend I went to the Green Living Show and saw a pedal-powered washing machine that I very much want to own:


You can pre-order at their website http://yirego.com/ but it won't be available until November. *cries*

As far as work stuff, I'm putting together a single-author anthology of fetish erotica featuring fun new stories as well as reprints from 2008 to present. If I can get my shit together, it should be available next week. Because I genuinely feel bad about being incommunicado for so long, I've decided to give this book away for free when it first comes out.

But not forever free, so please sign up for my newsletter to get a heads-up when it hits the market:

In other news, you might have noticed my novel Anonymous is no longer available for sale. The publisher, Amber Quill Press, closed down at the end of March, so rights have reverted to me. I think I wrote that book in 2008 or 2010 (or 2011?), so I want to give it a good once-over before I get it back out there. If you haven't read it, Anonymous is a menage book about a woman who becomes obsessed with discovering the true identity of the man she hired to entertain her bisexual husband. Aside from The Other Side of Ruth, it's my most Toronto-centric book.


I'm also late getting Round 3 of the Lexi vs. Giselle Smut Smackdown out there. I want to thank everyone who followed me into taboo terrain in the first two rounds. Not everybody's cup of tea, but these stories certainly are popular. 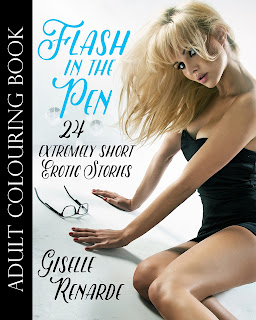 Oh, I almost forgot why I came here in the first place!

Well, I'm doing it again in May... but starting now!

So now though the end of May, I'll donate all proceeds from my two colouring books to Sketch. There's a flash fiction one and a poetry one. If you ask me, the flash fiction book is better. ;-)

Remember to sign up for my newsletter to find out when you can get the new fetish erotica anthology for free: http://eepurl.com/R4b11

Love you!
Giselle
Posted by Giselle Renarde at 11:15 PM No comments: