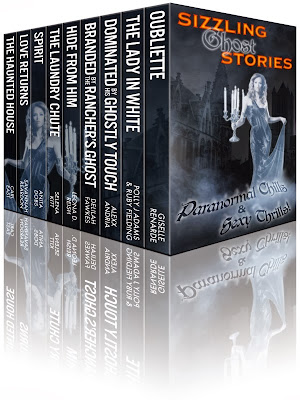 From some of the bestselling names in erotica comes a book full of sizzling encounters with ghosts and other things that go bump in the night, guaranteed to leave you breathless in more ways than one. Authors like Selena Kitt, Carl East, Delilah Fawkes and more, bring you paranormal chills with the sexiest of thrills - stories that are sure to raise your temperature a notch or two!

Warning: not for readers of a delicate disposition - these stories are likely to set the heart racing and fill the reader's head with wild and erotically charged sexual fantasies. You are advised to read these on your own but be sure to keep the lights on - just in case!


Get Sizzling Ghost Stories NOW for only $0.99!

That Little Perv Is At It Again: My Sexy Teacher, My First Time

Remember Lexi Wood? Sure you do. She's the sock puppet who's got her own section on my blog. She drives me nuts, but I just can't say no.

I thought she'd given up on smut after her first novella (Dance for Daddy, Salome) was banned by Amazon.  It might be back now (as something like Dance for ME, Salome, since you can't say "Daddy" at Amazon) but what the hell do I know?  That's Lexi's problem.

Anyway, she's got another ebook on the market now. It's a barely-legal first-time student/teacher piece of crap called My Sexy Teacher, My First Time.  I don't even know why I'm telling you about it.  I do way too much for this chick.

But just in case erotica set in a 1970s high school appeals to you, here's the blurb and whatever:

Lots of girls have crushes on sexy high school teachers.  When eighteen-year-old April Andrews’ biology teacher tells her they can’t be together, will she take his rejection lying down?  Or will she try even harder to make him her first?

When the bell sounded, I was surprised to hear him say, “Miss Andrews, would you stay a moment after class, please?”

Some of the girls made an “Ooooh” sound as they walked by me, and I realized for the first time how transparent I’d been, and how I’d put Mr. Lindbeck in danger of losing his job.  If the principle thought there was anything going on between my teacher and I, Mr. Lindbeck would be fired for sure.  It didn’t matter that I’d already turned eighteen and was officially an adult—I was a student and any relationship that blossomed between us would be utterly unacceptable.

Why had it taken me so long to realize that?

I approached the long podium from which Mr. Lindbeck taught, and even before the class had cleared out I apologized for what I’d said the week before.

“Never mind,” he replied, in a way that made me think perhaps he wasn’t angry anymore.  “You missed half a week’s work, Miss Andrews.  There’s plenty of catching up to do if you don’t want your grades to slip.”

He chuckled as the last students filtered out of the classroom, and he closed the door after them.

***
If you actually want to buy Lexi's stupid story, it's available from Smashwords: https://www.smashwords.com/books/view/375134

LEXI WOOD is a sock puppet who came to life one night while her keeper was out picking up Chinese food.  When nobody’s around, she bashes her face against a typewriter until stories come out. And those stories are shocking.

Lexi’s exterior is 53% acrylic, 37% nylon, and 10% recycled tinsel.  On the inside, she’s full of bloodlust, wanderlust, lust-lust, bathtub gin, and pills she found on the floor.  She also got into those tranquilizers you give your cat to get it in the travel carrier.  You shouldn’t leave those things lying around.

When she’s feeling dirty, Lexi likes to be held in soapy water and rubbed vigorously.  In her spare time, she sits on the shelf, waiting for someone to shove a fist in her hole.

Who would? Lexi Wood!

Posted by Giselle Renarde at 3:28 AM No comments:

Waxing is for Pussies: Act fast and you just might get it FREE! 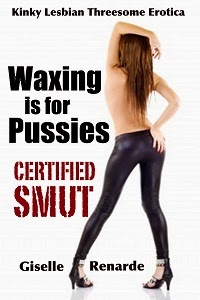 I closed my eyes. I didn’t want to see what was going on. In fact, a set of headphones would have been nice. Then I wouldn’t have been able to hear Soo Jin scolding my girlfriend as she did everything wrong.

Leaning close, Soo Jin licked my nipples. That tongue was magic. She blew cool air on my tits just as Billie came in with the wax. It felt like hot honey spreading through my pubic hair and down my inner thighs. I understood food fetishists a little better as hot wax spread across my skin, making me wet.

“Now put the muslin on top and press down,” Soo Jin instructed.

Billie did as she was told, applying pressure to the strip of fabric. “Is it okay, Claire?”

With a smirk that could have been mistaken for cruel, Billie said, “Good.”

Soo Jin turned toward Billie and her silky hair splashed across my chest. Billie raised a conspiring eyebrow as her co-worker said, “Remember to slap her. Slap her hard. It’s got to be hard.”

Act fast and you just might get it FREE!
Waxing is for Pussies will be up at Amazon soon, but for now you can get it at All Romance Ebooks
https://www.allromanceebooks.com/product-waxingisforpussieskinkylesbianthreesomeerotica-1386109-352.html
and Smashwords https://www.smashwords.com/books/view/392486

And as long as you're at Smashwords, you might as well use this coupon:

Posted by Giselle Renarde at 11:54 PM No comments:

I see that glint in your eye. You want your present! 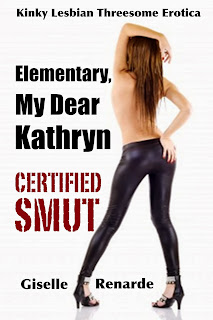 If you don't enjoy kinky anilingus, then sorry to show up at the party empty-handed.  I brought these hors d'oeuvres and a bottle of wine and I didn't know other people would be bringing gifts...

Merry Christmas Eve!
Giselle
Posted by Giselle Renarde at 10:47 AM No comments: 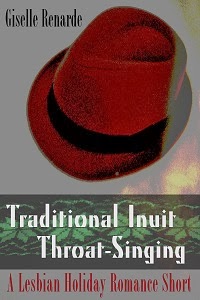 
Sarah’s the kind of girlfriend who holds her cards close to her chest. If Rusidan really wants to get married, she’ll have to get used to feeling shut out.

When the city hosts a Celebration of the Arctic and Sarah runs into girls from her hometown, she’s forced to confront her past in a surprisingly direct way.  Rusidan’s confused.  Why is Sarah picking fights with people she’s never even mentioned before?  What could they possibly have done to incur such wrath?

Will Sarah finally open up to Rusidan, or will their sensual spin on traditional Inuit throat-singing allow them to communicate without words?

If ever you have the opportunity to witness first-hand the magnificent spectacle that is Inuit throat-singing, don’t pass it by. There is nothing on this planet so cosmically beautiful. Those are the words that kept running through Rusidan’s head as she watched the show.

On an outdoor stage stood two young women with nothing but a microphone between them. Gripping one another, hands on forearms, they cuddled so close their faces nearly touched. They sang a capella and needed no accompaniment. One began before the other, producing a breathy sound. Lower than low, like a sub-sonic pant, the beat of her chant pushed forward like a freight train. How could a female voice produce tones so deeply resonant?

Her partner joined in, filling the gaps. The second starter vocalized at a higher pitch, singing in fleeting, orgasmic sounds. It was like nothing she’d ever heard in popular music. The effect was intriguing, transfixing, visceral. It resonated in the core of Rusidan’s being.

Rhythmic vibrations rumbled her body like the bass line at a rock concert. Who’d have thought throat-singing could be such a turn-on? Sexual and spiritual, it was the sound of divine union.

Those women must have been romantic partners, Rusidan thought. The way they focused on one another, with their faces so close they could kiss, gave them away. They rocked one another’s bodies, pushing and pulling outstretched arms along with the music. They danced to the very song they created. It was stunning. Beyond stunning. It was spellbinding.

With a burst of laughter, they broke away from each other. The second partner giggled, giving the first a playful push as if to deny their beautiful act had ever taken place. Throat-singing represented pure female sensuality, to Rusidan. It seemed almost tawdry that she should witness their show of intimacy.

Giselle Renarde is a queer Canadian, avid volunteer, and contributor to more than 100 short story anthologies, including Best Women’s Erotica, Best Lesbian Erotica, Best Bondage Erotica, and Best Lesbian Romance. Ms Renarde has written dozens of juicy books, including Anonymous, Ondine, and Nanny State. Her book The Red Satin Collection won Best Transgender Romance in the 2012 Rainbow Awards. Giselle lives across from a park with two bilingual cats who sleep on her head.
Posted by Giselle Renarde at 5:18 AM No comments: