Have I got a hot read for you! 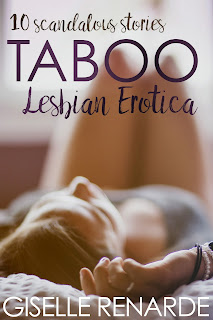 It’s forbidden. It’s wrong. You know you should resist, but the desire is too strong…

In Taboo Lesbian Erotica, kittens and cougars can’t fight their illicit urges. Their lust for someone off-limits is impossible to shake. What can they do but surrender to temptation? Especially when temptation comes in the form of discipline, punishment and scandalous sex with a woman who’s absolutely forbidden!

Ten shocking stories of women who can’t say no to scandalous sex!

TABOO LESBIAN EROTICA contains new fiction and fan favourites. There are definitely stories in this book you've never read--stories about stepmothers punishing stepdaughters, stepsisters getting off together, a niece who's hot for her aunt, even a godmother assigned to give her goddaughter "the lesbian sex talk."

Posted by Giselle Renarde at 8:07 PM No comments:

7 Fun Things to do on your Back


If you clicked because you thought I'd be telling you cool sex stuff, HAHA gotcha! Nah, I'm not trying to fool anybody. The truth is that my girlfriend and my cousin are about to undergo cornea transplants. For days afterwards they're going to have to lie flat, otherwise their eyes will fall out or something. I'm not 100% clear on the details.

(To be absolutely clear, my girlfriend and my cousin are two different people. I'm not dating my cousin. It's not like a wrote a lesbian erotica story called Pretty Cousin because I've got some kind of weird forbidden crush on her or anything.)

Anyhoo, the idea of people I love going under the knife is making me nervous so I'm channeling that energy into practical ideas. How bored would you get if you had to lie on your back for days just staring at the ceiling? Maybe you're doing exactly that right now and that's why you're exploring this post--you're searching for stuff you can do without using your eyes.

Well, here it is: my list of fun stuff to do on your back. I'll leave out the obvious (hopefully you can figure that out for yourself) but I will mention that I'm focusing on free options, relying on you having access to a library system, and focusing on Canadian content because I live in Canada, and so do my girlfriend and cousin.


My girlfriend's been reading audiobooks for years, even before her eyesight started deteriorating, so this point was the first that came to mind. She gets them from the library on CDs, but check out your library's website. You probably have access to audiobooks you can digitally download.

Alternatively, you can try out a 30-day free trial at Audible or purchase audiobooks or get them... I don't know where, exactly. I'm not a connoisseur. Every time I try to listen to an audiobook I just totally tune out. But, as I say, my girlfriend LOVES them so that's why Audiobooks are #1 on this list. UPDATE: Turns out I do know where to get audiobooks. Click here to read my post on the topic!

On the off-chance you, too, are an author, entrepreneur or author-entrepreneur (authorpreneur? Is that a thing people say?), I'll give you the inside scoop. Here are the podcasts I listen to:


This one is an especially Canadian recommendation. AMI-tv is a television channel available through every digital cable package in Canada (trust me--I have the most basic cable package in existence and I get). Every show on AMI is broadcast with described video.

What's described video? Okay, so try watching a movie or a TV show with your eyes closed. When there's a bunch of dialogue you can probably follow what's going on. What about when no one's talking?  How do you know what's going on? That's where described video comes in: a voiceover tells you what's happening, so you don't have to be able to SEE the television to follow the show.

AMI also creates a lot of original programming that's particularly relevant to its blind and low vision viewership. My favourite is Four Senses, a cooking show co-hosted by Christine Ha. In addition to the English TV channel, there's also AMI-télé which broadcasts in French with described video and also produces its own original content.

There's a third channel, AMI-audio, which is audio-only:


I watch the AMI French and English TV channels a lot, and one thing I really love about them is you start to feel a sense of community. Maybe it's just me. Maybe I need more friends.

p.s. I should mention that if a TV show is available with described video on another Canadian network (and if DV is available that should be announced before the show starts), you can enable your TV to talk at you the same way you can turn Closed Captioning on and off. To be totally honest with you, I've tried to do this on multiple occasions and it's never worked, so thank goodness for AMI.

p.p.s. If you don't have a TV and/or you do most of your media consumption via Netflix, I noticed the other day that when I scrolled all the way to the bottom of my Netflix screen there was a thingy that said "Audio Description." Sure enough, it took me to a browse screen of shows and movies available with audio description enabled!


Hey, you know what still exists? Radio! Some of it plays songs at you and some of it is talking... just like podcasts. In fact, you can listen to a lot of radio shows online now! I'm going all-in on the Canadiana today, because I'm sending you down CBC way.  I particularly like a show about the advertising industry called Under the Influence.

Again, the alternative to looking for this stuff on the internet would be to turn on a radio. If you own one.


Remember comedy albums? Me neither because I wasn't alive in the 70s!

Here's how I came to realize comedy albums are still a thing: my public library system gives me access to this great digital service called Hoopla. I stream music there (mainly Lana Del Rey--one of these days I'm really going to have to purchase Born to Die) but one time I started browsing, just to see what else was available. I came upon this category: Comedy Albums.

Comedy Albums? Is that still a thing?  I thought of Cheech and Chong, Steve Martin, George Carlin--and yes, their classic albums are still available--but alongside those are albums from contemporary comedians: Aziz Ansari, Amy Schumer, Jim Gaffigan... I'd have to list every comedian you've ever heard of and then a bunch you've never heard of. There are so many!

Let's get ready to laugh!

Or so I thought.

Then one day I took a tour of the CBC building here in Toronto and they showed us their radio drama recording studio. It was the coolest set-up, because part of it looked like the kind of TV set you'd see on a sitcom. There was a kitchen set up so the voice actors could physically act out emptying the dishwasher and closing cupboards. There were stairs to walk up and down. There were pads containing things like gravel or twigs to mimic the sound of walking outside.  The way I'd always pictured a radio drama setup was... remember that episode of Frasier where they do that murder mystery radio drama? But the one at the CBC was surprisingly large.

So yes, Virginia, radio dramas still exist! I found a bunch of them listed on Hoopla (again, through my library system), including Doctor Who radio dramas. With a quick Google search I've found you a bunch of them produced by the BBC and CBS Radio Mystery Theater.


We're going old-school one more time with the idea of language learning disks. I use a program called Mango but you need to look at a screen for that. If you're flat on your back and you can't do screen-related stuff, go back in time--back to the 80s and those language learning cassette tapes. Perfect time to bring them out again. The most romantic thing anyone has ever done for me was to learn French, although it wasn't my girlfriend who made that gesture. Wasn't my cousin either. heh.

I'll mention Hoopla yet again, because that's where I saw language learning albums listed as digital downloads. See what your library systems has got for you. If you've never explored digital download services provided to you free through your public library, now's the time!

If you need to spend time on your back, might as well enjoy it!

If you're big on audiobooks and you love erotica, I hope you'll check out my work, whether it's through a subscription service, as a purchase, or upon request from your local library.

But the best deal on Giselle Renarde audio erotica is still through my Patreon page, which is its own little subscription service. For one flat monthly fee (which helps me produce more of what you love), you get to listen to an audio erotica short every Friday. Join now!

Posted by Giselle Renarde at 12:28 AM No comments: