Guess What Else Came Back? My Mistress' Thighs! 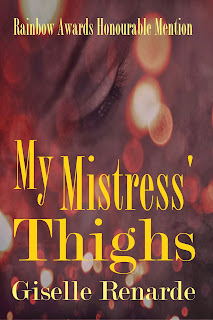 Yesterday I told you my award-winning trans lesbian Christmas novel The Red Satin Collection is back in print. Today another fan favourite is back on the market.  If you missed it the first time around (when it was published by loveyoudivine Alterotica), you can grab a copy of My Mistress' Thighs NOW in paperback or as an ebook!

(As an aside, I asked my girlfriend to proof the manuscript for me and she was like, "You know the title is grammatically incorrect, right?"  Uhhh... it is?  Talk about embarrassing!  My Mistress' Thighs is previously published.  It was awarded an honourable mention in the 2011 Rainbow Awards.  And all this time it should have been My Mistress's Thighs, not My Mistress' Thighs? I suck!  But when I re-published it I decided to keep it wrong to commemorate... well, I don't know what.  Just for fun.)

A cross-dressing cowboy, a post-war pin-up, and a wolf in grandmother's clothing all find a special home in My Mistress' Thighs.

From the timid closet dresser of Love in the Time of Instant Messenger to the post-op rodeo queen of Leslie Goosemoon Rides Again, all who seek love find it in the world of Giselle Renarde Erotica. 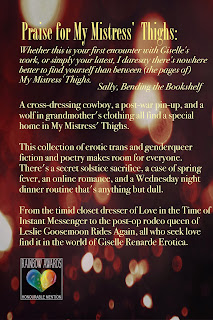 “The trick,” Patrick told me, “is to find someone who complements you.”

My throat produced a familiar noise, something like a giggle that only comes about when you’re trying not to cry.  “Yes, you really don’t compliment me often enough.  I’ll feel much better if you tell me I’m pretty.”

“Of course you’re pretty, but that’s not what I’m talking about.”  The off-handed compliment made my heart soar.  “What I mean is that if you look for someone who’s identical to you, there are too many sames.”  To illustrate his point, he withdrew his fingers from mine, only to press his fingertips against my fingertips so they exerted some pressure.  “When someone’s the same as you, all the sticky-outy parts meet up and you deflect each other. You see what I’m saying?”

“Yes.”  It suddenly occurred to me that this might be a break-up conversation, which I don’t think I could have handled on a first date.

“But when you meet a person who complements you—and I don’t mean this in a sexual sense—all the sticky-outy parts on you correspond to all the curvy-inny parts on them.”  Patrick brushed his fingertips down a touch until his were between mine.  Our fingers no longer deflected one another.  Now, they snuggled in, fingers woven between fingers, until we were holding hands again.  “You see?  When people complement each other, they fit together so easily.”

Was he talking about us?  I didn’t want to ask, but it was too early on.  Instead, I sat perfectly still, gazing at our interwoven fingers as though they might open to reveal a crystal ball.  Was that my future cradled in the sweating palms of our hands?  I had my doubts, but I could so easily be swayed.

Giselle Renarde is a queer Canadian, avid volunteer, and contributor to more than 100 short story anthologies, including Best Women’s Erotica, Best Lesbian Erotica, Best Bondage Erotica, and Best Lesbian Romance. Ms Renarde has written dozens of juicy books, including Anonymous, Ondine, and Nanny State. Her book The Red Satin Collection won Best Transgender Romance in the 2012 Rainbow Awards. Giselle lives across from a park with two bilingual cats who sleep on her head.
Posted by Giselle Renarde at 7:48 PM No comments:

The Red Satin Collection is Back in Print! 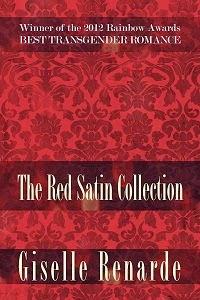 This is a Christmas of firsts for girlfriends Maisie and Regan. Maisie hasn't returned to their hometown since beginning her transition from male to female. Regan hasn't spoken to her hard-drinking Cree father in twice that time. Will family drama, secrets, and new arrivals strengthen their bond or tear Regan and Maisie apart?

The Red Satin Collection is a transgender lesbian holiday romance that includes content suitable for adult readers only.

As you may recall, The Red Satin Collection was originally published by the now-defunct (but always occupying a special place in my heart) loveyoudivine Alterotica.  It was written in three parts over three years.  Basically, it was three progressively longer short stories. The problem was that those stories always wanted to be a novel.  So, for this second edition, I've novelized it so it can be read straight through, and published it as an ebook AND in print.


Order yourself a copy today! 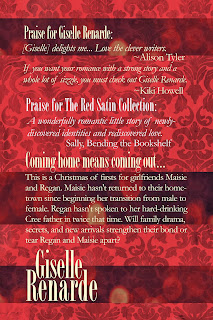 "Is mom home?" Maisie asked, before taking a step forward.

"Oh yeah, for sure." After another moment of silent, awe-struck staring, Mitts turned her head and yelled, "Mom!"

"What?" a disembodied voice hollered back. "I'm on the toilet."

Mitts turned back to Maisie. "Mom's on the throne."

Another voice joined the conversation. "Oh my god, Mitts, do not walk by the upstairs bathroom!" It was Maisie's second sister, Kayla, holding her nose as she descended the stairs. "Jesus, the whole hallway reeks to..."

As she spoke, Kayla's gaze settled on the open front door.

The fingers pinching her nose slid down until her hand covered her embarrassed mouth. "Oops... sorry. I didn't hear the doorbell."

"Kayla, it's Mark," Mitts said, then whipped her head around. "Shit, I'm sorry. You don't go by Mark anymore. Do you? Well, obviously you don't. Duh. That was a stupid question. I'm sorry."

"It's okay," Maisie said, though Regan could hear the disappointment in her girlfriend's voice. "You don't need to apologize. I understand."

Mitts shook her head. "No, I'm an idiot. And I can't for the life of me remember your new name."

"It's Maisie." One more voice rang out from behind Kayla. "Maisie, like my mother, your grandmother. It's a beautiful name. It's perfect."

When Maisie looked up, Regan could feel the happiness coursing through her body. "Mom!"

As Maisie bolted through the front door, her mother ran down the stairs. They met in the hallway and dove into each other's arms. Though Maisie was taller than her mother, something about the nature of their hug dwarfed her, in Regan's eyes, and she appeared as a little child.

Get it in print:

Or as an ebook:

At the start of the month, I declared November Transgender Fiction Month and assured you I would donate 10% of earnings on my trans books to LGBT Youthline.  I'm going to keep that going throughout December, so please keep buying!  I thank everyone who's supported my work this month.  You guys are amazing.

Posted by Giselle Renarde at 8:11 PM No comments: