A Wolf in Grandmother's Clothing

When I uploaded "A Wolf in Grandmother's Clothing," I wasn't quite sure how to classify it.  It's an erotic-ish fairy tale adaptation, but I wouldn't call it erotica and I wouldn't really call it romance.  There's a fetish component and kind of a mind-possession cross-dressing thing going on, but I don't know how to categorize it. 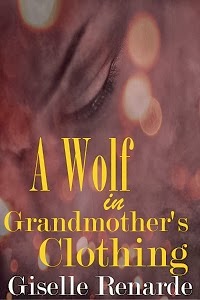 How far would the wolf go to trick Little Red Riding Hood?  And what was Grandmother really wearing under that tattered old housecoat?

When Wolf encounters Little Red in the woods, he turns on the charm. Red doesn’t buy his bull.  She likes girls and she’s not afraid to kick him in the crotch to get the message across.  Well, Wolf’s got plans.  He pays Grandmother a visit and, when she brings out the leather and locks him in her bedroom, what can he do but swallow her whole?

As soon as his bellyache wears off, Wolf hears a voice—a woman’s voice—telling him to shave his fur, paint his face, and put on Grandmother’s corset…

Read an excerpt from A Wolf in Grandmother's Clothing:

When Wolf collapsed in anguish at the entrance to Grandmother’s house, she opened her door with a provocative chuckle.  Pulling him by the tail into her modest kitchen, she asked, “Back for more, are you?”

“Couldn’t if I wanted to.”  He never wanted to, but Gran was an insistent woman.  “I met your granddaughter along the way.  She kicked me in the ‘nads.”

“I’m sure you deserved it.”  Grandmother cackled.  Leaving him like a broken yolk on the kitchen floor, she untied her tattered housecoat.  “A little spitfire, isn’t she?  The kid takes after her old Gran.”

Slipping the terry robe from her shoulders, she revealed a body cloaked in the habitual getup: leather corset, black stockings and panties, gloves and collar.  If he hadn’t already felt nauseous from the kick in the crotch, this sight would have done the trick.

As he scrambled to his feet, she caught him by the tail and dragged him to the bedroom.

“Your granddaughter!” he cried in agony mixed with desperation.  “She’s on her way.  You wouldn’t have her catch us like this?”

“Time enough for a quick go,” Gran rebutted, picking Wolf up by the underarms and tossing him on the bed.

Before he could make a break for it, she bolted the door.  There was no question as to why she had iron bars on her windows. It wasn’t to keep out thieves so much as imprison gentleman callers.


Coming soon to other retailers!
Posted by Giselle Renarde at 11:13 PM