A GOOSE IS NOT A GARBAGE CAN 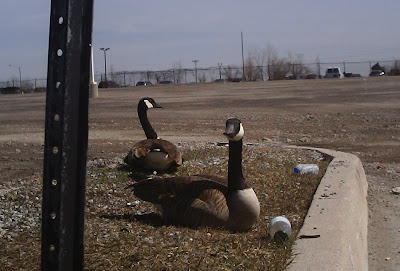 I bet you anything those two juice bottles do not belong to those two geese.

This image really hits home the whole 'paved paradise and put up a parking lot' idea. Bad enough we're trying to carve out a living in the desolation of a city of parking lots -- but just look what our wildlife ends up with: a patch of gravelly grass where people have idly thrown their recyclables.

When I was taking this photo, a woman walked by and said, "What a crappy place to build a nest." I wondered if she meant the geese had chosen a stupid place to take a rest. I'd like to think she meant that humans' wastefulness and environmental destruction is leaving little choice for passerby creatures.

Let's be clean when we're not being dirty, friends.
Posted by Giselle Renarde at 9:53 PM

Email ThisBlogThis!Share to TwitterShare to FacebookShare to Pinterest
Labels: Canadiana, Not a Garbage Can, social commentary 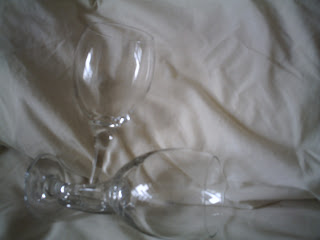 I'm happy to be able to share with y'all --free of charge-- a cute little story called, Cocktails at Bedtime.

Cocktails at Bedtime can be read right now for free at Hips and Curves, a plus-size lingerie site that carries some really gorgeous apparel. You'll see at the bottom of the screen the words, "Curvy, Confident, Fabulous!" and that's the spirit in which I wrote Cocktails at Bedtime. Curvy women are fabulous and I wish they all shared in the lovely spirit of confidence that comes across at Hips and Curves.

I was encouraged to write for this site because I love, love, love curvy women. I work with this girl who has the most spectacular curvy body --nice wide hips, gorgeous breasts, and a midriff you just want to dig your nails into-- and yet she's obsessed with the idea of losing weight. So sad! She's perfect just the way she is. In fact, if I didn't have that rule about not hitting on people I work with, she'd be in trouble...

Cocktails at Bedtime. Read it. It's free.
Posted by Giselle Renarde at 2:37 PM

a storm drain is not a garbage can 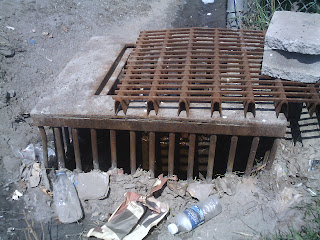 Where does that garbage come from? Everywhere. Any time anyone drops litter on the ground, there's a good chance it'll get carried by rainwater into your local water system. In our case, all this plastic crap gets carried out into lake Ontario. This is bad news for our beaches and aquatic wildlife. I remember a time when we could actually swim in our lake. Now many won' 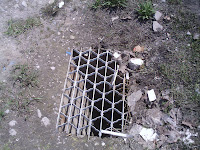 My friend Monty wanted me to mention another concern, tied loosely to this one. I need to explain this picture a bit: See that glass tube? Okay, not so much, right? It's near the base of the grate. Well, last week there was another piece of it sitting on top of that storm drain. I got a picture, but my camera erased it (always the camera's fault). Anyhoo, that other piece (not pictured) looked a heck of a lot like part of a halogen or CFL lightbulb.

Enter my friend Monty's concern: Mercury content in compact fluorescent lightbulbs. He wanted me to share with you these safety tips on cleaning up if you should ever be so unfortunate as to break a CFL bulb. Be careful, friends. Safety first!

Email ThisBlogThis!Share to TwitterShare to FacebookShare to Pinterest
Labels: Not a Garbage Can, social commentary

Pardon me while I swoon for Peter Mansbridge.

Now, I’m not big on news programming. For all its sensationalism and thinly-veiled biases, I never watch the local news. I’ll tune into the National News on the Aboriginal People’s Television Network once in a while and I try to catch In the Life, the gay and lesbian newsmagazine aired on PBS. I watch a few political debate programs on TVO as well. As for “THE NEWS,” though? Angers up the blood. I’ve learned I can do without it.

That said, if anyone could pull me in to news programming, it would be none other than the Canadian Broadcasting Corporation’s own Peter Mansbridge. When I search the airwaves for sexy Canadians, he stands bald head and broad shoulders over all others.

But there’s more to Peter Mansbridge’s charm than just a bald head. There’s a brain in that head! He has that very Canadian ability to ask incisive questions without attacking the interviewee, something American political journalists can’t seem to manage.

There’s that sneaky dimpled smirk, like nobody can pull the wool over his (are they blue?) eyes. There’s the crossed leg with shoe nodding playfully along. And have you ever seen Mansbridge in a black turtleneck? Hot stuff!

What a tease that his political program is called One on One with Peter Mansbridge! I’ll tell you what I would do if I got my hands on some one on one time with Mansbridge: I’d put those lovely pink lips of his to work, and we wouldn’t be talking politics.

For those who like the oldie-baldies, Peter Mansbridge goes in the hottie file.

Posted by Giselle Renarde at 8:20 PM

BULLRUSHES ARE NOT A GARBAGE CAN 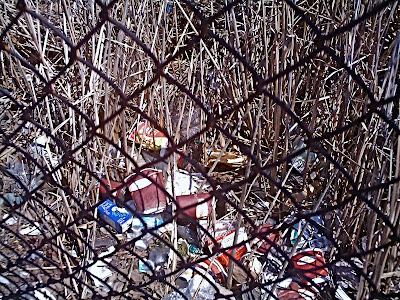 Baby Moses wouldn't have survived bullrushes like these.
Not much wildlife is going to survive here, either.
Disgraceful...
Posted by Giselle Renarde at 9:52 PM

Email ThisBlogThis!Share to TwitterShare to FacebookShare to Pinterest
Labels: Not a Garbage Can, social commentary

Yes, Annette, there is a Donut Warehouse! 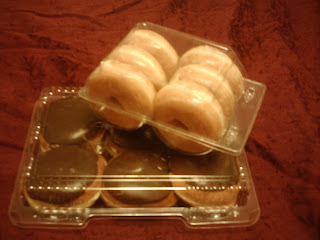 Move over, Timmy. Annette is in town, and she’s got Raspberry Jelly-Filled donuts. In fact, she’s got more variety than you can shake your hockey stick at!

Who is Annette? Umm… I’m not sure, but she makes some damn fine donuts right here in Toronto. According to her website, http://annettesdonuts.com, Annette’s Donuts is a family-owned company that’s been in business for over 25 years.

The reason I’m writing about her is that, aside from making truly delicious donuts, she’s just opened a cash and carry at right at the factory location:

Now, friends, I LOVE factory outlets. I’m talking true factory outlets, where you buy goods straight off the line. That’s what you’re in for when you visit Annette’s. The donuts are the freshest of the fresh, I tell you.

The entrance to Annette’s cash and carry is a little clinical, I must say, but “clean” and “food” go well together, don’t you think? When you enter the little lobby, there’s a small wall of windows. On the other side of those windows sit every variety of donut you could dream of… unless you have some seriously bizarre donut dreams. Prices are on the windows, and these prices seem to include tax.

Alright, now you know what you want. If you’re me today, you want a package of 6 Bavarian Creams and a package of Annette’s signature Glazed Ring donuts. You tell the order-taking triage nurse what you would like (seriously, this place reminds me of a hospital) and you get your delicious donuts.

Let’s talk money. Are you getting a great deal at the cash and carry? Yes and no. I paid $2 for my 6 Bavarians. That seems like a great deal. I paid $1 for my 6 glazed rings. That’s a steal. However, you can get buy that same pack of 6 Annette’s glazed donuts for the same price at many No Frills supermarkets in the western part of the city.

So, is Annette’s worth the trip? GOD, YES!!! Why? Prices are low, selection was awesome even at 15 minutes before closing time, and these donuts are the freshest you can get. If you live in or around Toronto, hop on over to Annette’s. You won’t regret it. Unless you eat a 6-pack of Chocolate Crullers all in one sitting. You might regret that.
Posted by Giselle Renarde at 9:09 PM

A SNOWBANK IS NOT A GARBAGE CAN 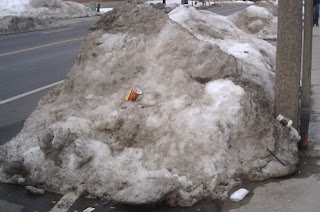 Ah, April in Canada. Looking out my window, I still see some snow on the ground. Mostly mud, but some snow as well.

As I walked down my street (or indeed any street) throughout the winter, I was astounded to see that every snowbank had some garbage thrown into it. This picture was taken a few weeks ago. Now that most of the snow along the roads has melted, the curbside is full of mushy trash.

See all of those snowbanks? They were full of garbage. Those beautiful, natural, white (okay, grey) mounds of virgin snow were full of garbage!!! Every snowfall, the roads got plowed and all those lazy littering bastards out there threw their coffee cups on the snowbanks. Then it snowed again and that garbage got buried under more snow. And on and on and on all winter.

Seriously, how hard is it to put garbage in a garbage can? It doesn't belong in the snow.
Posted by Giselle Renarde at 8:03 PM

Email ThisBlogThis!Share to TwitterShare to FacebookShare to Pinterest
Labels: Canadiana, Not a Garbage Can, social commentary

For the Girls is a membership-based adult site and ezine, so if you’re visiting for the first time expect to pay a fee. As well as explicit pics and movie content, they also offer a full women’s magazine focusing on sex, women’s health and humour.

Honestly, most content out there is geared toward the male gaze, which can easily fall into the trap of being

Posted by Giselle Renarde at 7:57 PM