Stacy's Dad Has Got It Going On #OMYW #NewAdult #BestFriendsFather 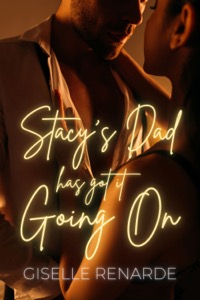 I wrote Stacy's Dad Has Got It Going On one summer, thinking I'd put together a nice little fluffy sex romp about a geek girl and her roommate's father. And, in essence, I suppose that's what it ended up being, plot-wise, but I didn't expect the characters to take such firm hold. I didn't expect them to flesh out quite so fully. But they were insistent.

After I'd written this book, I realized it wasn't just for the nerdy girls who want to express themselves sexually in a non-Girls Gone Wild sort of way (like me) but it was also very much for those who grew up with addiction in their households (...like me).

There's something that stays with you all your life if you were raised by a parent or guardian with an addiction. It's a quality of trepidation, an immediate mistrust not only of people but of the potential impact of all substances. In this book, Savannah, the girl who falls for her roommate's dad, is all about clean living, and probably more out of fear of what alcohol and other things might do to her... or make her do.

But she really resents the assumptions other people make about her based on her choice not to drink or do drugs--people ask her to her face if she's a recovering alcoholic, or if she's a religious nut. She's been so focused on school and high achievements that she hasn't given much thought to guys, even though GOD does she love to get laid when the opportunity arises.

Against all odds, and much to my bewildered satisfaction, this book blossoms into a romance when Savannah, who is so like me in so many ways, finds someone who understands the quirks leftover from childhood are still a driving force of her life and personality. Let's just say it surprised me, and I always love it when a book can do that.
(This blog post was originally written when the first edition of Stacy's Dad came out in 2011.) 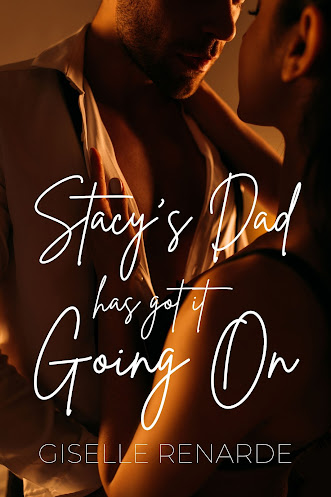 Stacy's Dad Has Got It Going On
By Giselle Renarde

When Stacy's dad shows up unannounced at her apartment, her roommate Savannah is smitten. Eric's career in humanitarian relief makes him college-girl catnip, and his good looks and hot body only sweeten the deal.

Eric doesn’t often visit, but after catching his wife with a younger man he doesn’t know where to turn for consolation. Stacy does her best to cheer him up, but no amount of daughterly compassion is going to heal his bruised ego. He needs a special woman to lick his wounds.

Too bad nobody warned Savannah that Eric would bring more baggage than she'd bargained for...

“I’m not going to the hospital.”

“Yes you are,” Eric replied simply. But instead of pulling off his pajama pants and pulling on his jeans, he collapsed beside her on the couch. “Just give me five more minutes.”

She sighed and reached again for the remote, this time with more care. “See?” she said, turning down the volume. “As long as I don’t move too quickly, I’m fine. I’ll just put another round of ice on my ankle and in the morning I’ll be healed.”

Eric’s eyes popped wide open at the mention of ice. “You know, that’s not a bad idea.” Pressing both hands down on the couch, he pushed himself up and hobbled to the kitchen. He sighed as he opened the freezer. The cold seemed to revive him. He brought the tray out and snapped it back and forth before dumping the ice into a metal mixing bowl. Even before leaving the kitchen, he picked up one piece and traced it along the base of his jaw and down his neck. “That’s better,” he said. “Nothing like ice dripping down your neck to wake a guy up.”

“If you say so.” Savannah chuckled. “That’s never been my game.”

He brought the ice to the TV room and sat on the coffee table before placing the metal bowl on her ankle. She flinched, but she didn’t move her foot away. Anything so unnerving must be a help.

“How does that feel?” Eric teased.

He moved the bowl from her ankle and set it on top of a magazine. From it, he swiped a single cube. Savannah cringed as she watched it coming for her, but when the ice made contact with her skin, she was surprised it wasn’t painfully cold. If anything, it tickled.

“How about this?” Eric asked, tracing the cube around her slightly swollen ankle. “How does this feel?”

The ice melted quickly between his fingers and her flesh. Droplets of water trickled down her foot and dripped from her heel onto the throw pillow underneath.

“Good,” she said. To her surprise, it was true. “It feels really good, actually.”

“What if I do this?” Eric asked, picking up a fresh cube and tracing it up the inside of her calf. Shifting her robe aside, he circled it around her knee before drawing it slowing up her thigh. The cold made her tremble now. She felt its effects more between her legs than she had against her ankle. A whole line of water droplets tumbled down her inner thigh, soaking the terrycloth beneath her. She knew where he was going with this, and she wanted to show him she was on board.

Savannah untied her belt and let her robe fall open at the front. Her breasts were warm and soft with sleep. “Do my tits,” she bid. “With the ice. Make them hard.”

A churlish grin bled upon Eric’s pink lips. “You want me to?”

And here is the Universal Book Link for more retailers: http://books2read.com/StacysDad
Posted by Giselle Renarde at 12:20 PM No comments:

Email ThisBlogThis!Share to TwitterShare to FacebookShare to Pinterest
Labels: books, life, promo, sexuality, why did you write this book?, writing 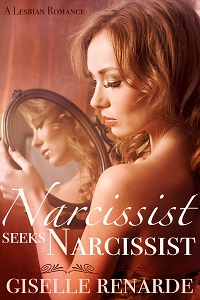 
Szuszu the former model has survived on women and scotch since she was just a teenager. All these years, she's had her best friend Babette by her side, but now that Babette is married and setting off on a world tour, Szuszu feels utterly abandoned. As a pre-departure joke, Babette writes up a silly and snide little personal ad, which narcissistic Szuszu posts in hopes of attracting a woman who looks just like she did when she was young.

Universal Book Link: http://books2read.com/Narcissist
Posted by Giselle Renarde at 9:30 AM No comments: