Did you miss me? (And the big Smashwords sale I forgot to mention...)

That sounds like something cheesy a rock star would say (“I’m nothing without my fans!”), but the truth is that when I’m away from the internet, I miss sharing my life via blog posts and twitter. I miss interactions with my fellow authors. I miss YOU. 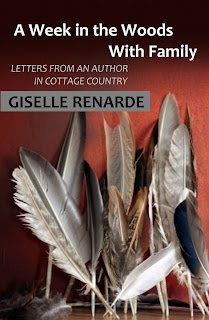 I was at the cottage with my fambly last week, which got me thinking about a book I published a couple years ago: A WEEK IN THE WOODS WITH FAMILY. I regret to inform you that it's not taboo incest erotica. So sorry. In fact, it's not erotica at all. It consists of a series of correspondences I penned to my girlfriend while I was away on a family vacation.

Throughout the month of July, you can get A WEEK IN THE WOODS WITH FAMILY absolutely FREE at Smashwords using coupon code SFREE. If you enjoy a good behind-the-scenes look at an author's life, this is the book for you: https://www.smashwords.com/books/view/650981?ref=GiselleRenardeErotica

I thought I'd already blogged about Smashwords' big July sale, but turns out I haven't. I scheduled a bunch of tweets about it--that's what I did. My mind is muddled from all that clean cottage air.

So, pretty much my entire catalogue is on sale right now. You get discounts by using coupon codes. The coupon codes are listed on each book's page, on the right-hand side of the screen, under the buy/add to library/give as gift buttons.

I'll call your attention especially to BISEXUAL BEACH READS, which is 50% off with coupon code SSW50: https://www.smashwords.com/books/view/644898?ref=GiselleRenardeErotica

You can scroll though my books and Lexi's here: https://www.smashwords.com/profile/view/GiselleRenardeErotica but the sucky thing is that sale prices don't show on that list. You have to actually click onto each book individually to see which coupon is in effect. But it's Monday afternoon and, if you've got a boring job (or you're a master procrastinator like me), you might just have some time to waste.

So yeah. Waste some time with me: https://www.smashwords.com/profile/view/GiselleRenardeErotica

p.s. i love you
Posted by Giselle Renarde at 2:27 PM No comments:

Hello, all you wonderful people!

I woke up this morning thinking, "Hey, it's statutory holiday. I should take the day off!" haha juuuuust kidding. Most people who are self-employed will tell you the calendar doesn't dictate days off.

No, what I really woke up thinking was, "Hey, it's Canada Day. I should do a blog post about my Canadian books!" One could argue that all my books are Canadian, by virtue of my being Canadian, but some books are more Canadian than others.

But you know what? I'm tired of talking about my books. Last night I was chatting with Sweet about how I've failed (as a business) to capitalize on Pride Month. I am a queer author. I'm in the perfect position to be like "rah rah Pride, buy my books!" but you know what? Every business does that now. Sweet said I should consider it a good thing when I see rainbows in every storefront, because it's spreading awareness (even if those rainbows are just there to pad the bottom line).

I'm too cynical for my own good.

Okay, so I went off on a bit of a tangent there. Let's rope me in and get back to Canada Day. If you're really interested in reading books of mine that are especially Canadian (in setting as well as tone), I would recommend The Other Side of Ruth or Anonymous.

However, I want to focus on Canadian music today. I've heard readers say that a book has saved their life. A book has never saved my life, but music has on many occasions. When I have a little extra money to spare, you know what I buy? Okay, cheese. But aside from cheese: music and art.

And there's so much great Canadian Indie music out there. I made a list, off the top of my head, of albums I love and listen to frequently. This is by no means a scientific top ten list. Anything that comes directly from my brain has little bearing on reality.

So, here we go! In no particular order, because this is not a real top ten list...

Tanya Tagaq
I have a funny story about Tagaq, who is a kick-ass Inuit throat-singer: my aunt went to see her perform last year, largely on my recommendation (because a Tagaq performance is a life-changing experience), and she came back kind of in shock because there's legitimately no way to prepare yourself for Tagaq's brand of gritty, nasty gorgeousness. Sometimes you're like, "Am I watching someone have a really intense orgasm or give birth to a planet?" And the answer is BOTH. Tagaq's albums are spectacular, but nothing beats seeing her live. I especially recommend her reclamation of Nanook of the North. It's a feat of endurance like you wouldn't believe.

Cold Specks
This is an artist who actually reminds me of one of my sisters, and here's why: when Cold Specks started singing professionally, she did not tell her family. They found out she'd released a record when her sister went to the movies and the album was advertised on screen. Busted!
I'm eagerly awaiting her next release, which will focus on her Somali roots.

Mother Mother
I can't get enough of this group. I own three of their albums and three is not enough. I listen to them ALL THE TIME. Like if you see me on the bus and I've got headphones in, there's a 90% chance I'm listening to Mother Mother.

Owen Pallett
Heartland is more an experience than an album. It's like listening to an opera. I don't mean that in an off-putting way. A lot of people aren't into opera, I know. I'm not saying it SOUNDS like an opera, necessarily, although the orchestration is mind-blowing... oh, just give it a listen.

Rufus Wainwright
Does he count as indie? Probably not. I don't care. It's my list and I'll do what I want to. Rufus is like candy. You can't listen to just one song. You want another and another, until you're on this sugar high you can't come down from. Here's another singer you want to see in concert, because he's such a diva and such a ditz, and his voice is so spectacular you'll wonder if he's really human or if he's got a bionic harp in his throat.


k-os
You'll notice I've given you a video instead of an album cover for k-os. That because... do you ever watch a music video and go, "What the hell has that got to do with anything?"  Someone had an artistic vision that had nothing to do with the song itself. That's annoying, and that's NOT the case with k-os's videos. For me, they always build on my understanding of the song. (btw I only found out what a crab bucket was a couple weeks ago. Apparently if you put crabs in a bucket, if one crab tries to escape the other crabs will pull it back down. If I can't escape, no one can.)

Chilly Gonzales
Gorgeous piano music from an eccentric dude. I think he broke a Guinness World Record by playing piano for 24 hours straight? Guess I could look that up, but it's a holiday and I'm feeling pretty lazy.

Austra
Speaking of opera, the singer you're going to hear on this album (whose name I don't remember off the top of my head) is a classically-trained opera singer. I think she even went to my Alma Mater, the University of Toronto, but I could be making that up. Atmospheric sounds, here. Coooool.

Posted by Giselle Renarde at 1:55 PM No comments: