Better Than Baseball: It's the Bedded Bliss Blog Tour 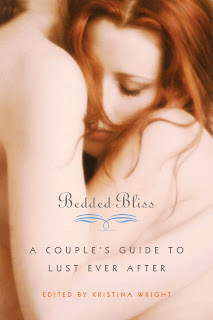 So, marital bliss (or marital anything, for that matter) is about as far out of my realm as... I don't know... I'm trying to think of a topic I know nothing about.  I have a lot of random knowledge about useless topics, but marriage is just way out in left field.

Oh, baseball!  That's something I know nothing about.  My mom and my sisters are always trying to get me to come to Jays games with them, but I'd rather spend that time re-grouting my shower, thank you very much. Am I the only one who thinks baseball is ridiculously boring?

Anyway, after that controversial introduction, here's the new book put together by KristinaWright: Bedded Bliss is full of romantic stories for monogamous couples.  If you're starting to think about married sex the way I think of baseball, I suspect this book is for you:

Groundbreaking Guide to Red-Hot Monogamy from Wife and Mother Kristina Wright
It’s fairly easy to fall in love (or lust), but keeping that passion hot and heavy after twenty years of marriage can get tricky. Kristina Wright has two toddlers and a red-hot marriage, and there’s no one better suited to helping other couples make lust last. Bedded Bliss: A Couple’s Guide to Lust Ever After pairs hands-on advice for long-term lovers with steamy tales to inspire couples to enact their own erotic adventures. Each chapter begins with “sensual suggestions” for keeping in touch—literally! Read real advice and stories from couples, who have a combined total of a whopping 235 years of long-term relationship experience, and find out what works for them to keep their fires burning steady and hot.  Romance writer and editor Wright re-invents the sexuality genre, presenting a guide that simultaneously educates and entertains. Bedded Bliss is a treasure trove of resources for couples to ensure that monogamy will never again mean monotony.

The year from Hell stretched to two, and everything that could go wrong did. For my husband and me sex wasn't the answer, but it sure went a long way toward helping us reconnect, remember what’s important and release some of the pent-up stress. With a reaffirmation of the bonds we share, we were once more ready to face the world, together.

It’s one o’clock in the morning, and I’m wide-awake. This isn't anything new, unfortunately. Recently sleep has become an elusive, craved and yet frightening concept. It sometimes provides relief, sometimes makes things worse, as problems follow me into dreamland and continue their unrelenting torture.

Beside me, my husband sighs and rolls onto his side. From the tenor of his breathing I know he’s dead to the world, and annoyance flashes through me. How can he sleep so soundly, night after night, while I lie awake, my brain unable to shutdown long enough for me to nod off?

But I know I’m not alone with my fears. All the signs of stress are there in him too. Just this evening I looked across the living room and caught him staring out the window, eyes unfocused, fingers tapping a sharp, staccato rhythm on the arm of his chair. He’s usually calm, almost serene, just the type of man a high-voltage woman like me needs. He’s my anchor, the voice of reason when I’m tempted to go off the deep end. It hurts to see him obviously restless, with worry etching new lines into his beloved, beautiful face.

Staring up into the darkness, I start cataloging our problems, the relentless cycle starting anew. Instantly the muscles in my neck tighten and my stomach knots. I try to think of something else— concentrate on the plot of my latest book—but within minutes I've somehow circled back to reality. Sometimes I think I’d feel better if I could just cry, let it out, but that’s not my way. Tears have always been something to avoid, repress, fight. They’re a weakness I can’t allow myself. If I start I might not be able to stop, and that thought scares me more than any other. For me, that heralds the onset of madness.

As though sensing my terror, my husband moves closer, his arm settling across my stomach. That simple touch, the sensation of his warmth so close, brings a sob close to the surface and I’m forced to swallow it down. I don’t feel as though I deserve his affection right now. I have a sneaky suspicion the blame for our current problems rests squarely on my shoulders. Yet, it feels so good having him beside me. Instead of moving away I roll onto my side, facing away from him,and spoon closer.