November, I Hereby Dub Thee the Month of Trans Fiction

Transgender fiction is kinda my first love.  It's close to home since, as you probably know, my girlfriend is trans.  Until this summer, I had tons of books on the market that featured trans and genderqueer characters.  They were published by an amazing little house called loveyoudivine Alterotica.

Here's how awesome loveyoudivine (lyd) was: after a brief email conversation about the transgender gap in the LGBT erotica/romance publishing sphere (often seems like LGBT="gay and lesbian" while the bi and trans fall by the wayside), lyd's owner asked me to help create a line devoted to transgender fiction. She published stories about trans people who were REAL PEOPLE, who fell in love, who had trepidations, who had fears and body issues, and desires and wants, and, and, and...

But THEN I discovered the wild world of self-publishing.  And I was happy.  Because suddenly I had a great way to get previously-published books with great track records (two of them won awards) back on the market on my terms and timelines.

This months, guys. THIS IS THE MONTH!  I'm gettin' back on the horse, getting my erotica and romance starring trans characters, genderqueer characters, cross-dressing characters back out there.

November is the month in which we observe Transgender Day of Remembrance, so I'm also committed to donating 10% of the royalties I earn on my trans releases this month to LGBT Youthline, a peer support site for queer youth. 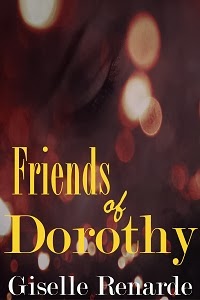 Friends of Dorothy by Giselle Renarde


When rodeo king Leslie Goosemoon is caught wearing lacy red panties, Dorothy's Tavern is turned upside down by the ensuing brawl. Does Dorothy have what Leslie needs, or does her boyfriend Ricky know better?

Leslie Goosemoon is a rodeo star with legions of ladies fawning over him. Things are getting hot and heavy with the one-night-stand he picked up at Dorothy's Tavern, until she unzips his jeans and finds he’s wearing ladies' panties. When he returns to Dorothy's, the whole bar's heard about his predilection. Nobody understands him, but that doesn't mean Leslie understands himself. The best he can do is duck the punches and repel the spit.

Dorothy's boyfriend Ricky has a theory about the undies: Leslie dresses like a lady because he secretly wants to get with another man. That doesn't sound right to Leslie, but what does he know? He just likes the silky feel against his skin. After a bar brawl, Dorothy sends the boys upstairs to lick their wounds. Who knows what else will take a licking?

Read an excerpt or buy a copy at:

Coming soon to other retailers!

Posted by Giselle Renarde at 11:22 PM