Nothing says Merry Christmas like an old bald guy cheating on his wife with a much younger woman who has a slight latex fetish... 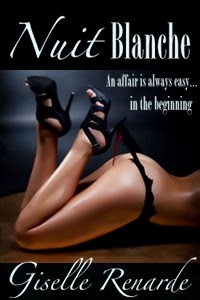 I'm watching a Victorian Christmas marathon as I type up this post (yes, it is 4 in the morning--why do you ask?), but Nuit Blanche is not a holiday story.  It's actually a story from my Audrey and Lawrence collection, which is a series of short stories about a married man named Lawrence and his young mistress Audrey.

As other formerly taboo topics move more into the mainstream, it seems that adultery has taken over as the love that dare not speak its name.  It's been suggested to me by readers and other authors that this reflects a shift in how we view love and marriage.  Used to be that couples married young and grew apart.  When divorce wasn't so common, you'd stick it out because you were expected to. If you happened to slip into indiscretion (and you were a man--double standards do apply), well, hey, that's life.

Now we're getting married later (I use the term "we" with artistic license--I've never been married) and if we want a divorce, meh, whatevs.  Also, if we want polyamorous relationships, more and more of us are open to the concept.  So why would you cheat on your wife, you bloody bastard?  Cheating is lying and lying is unacceptable.

Speaking as a person who's written a fair amount of adultery erotica... yikes!  Bad for business. My Audrey and Lawrence stories don't sell very strongly, despite being close to my heart and close to my life. In case you hadn't heard, I was mistress to a married man for nearly 10 years.

And Nuit Blanche is based very much on real events. You can't make this stuff up...

Enjoy!
Giselle
Posted by Giselle Renarde at 4:43 AM