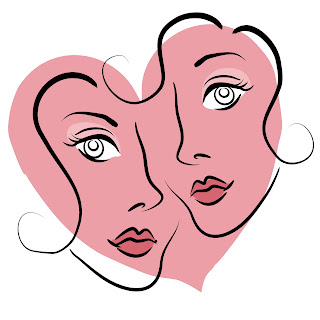 I thought I'd already told you the story of my first kiss with my girlfriend Sweet...the one on my balcony when she came to my house at one in the morning to finally reveal herself to me in full female form. My sister says I repeat myself too much, so I was going to resist retelling the story until I actually read my old blog entry entitled Same Old Sparkling Eyes and realized I'd left out the kiss.

So, at risk of pissing off my sister, I will repeat my story--this time, without neglecting the kiss.

This recollection takes us back to the time before my Sweet came out to me identifying as a male-to-female transsexual. Remember, when I first met Sweet, she presented as a boy. She, who was then he (at least, to me...) had made some strong suggestion leading me to believe she identified as a cross-dresser. In fact, don't tell her this because she'd kick my ass if she knew, but the nickname Sweet was originally short for "Sweet Transvestite." And I feel like a huge scuzz admitting that, because transvestite is not a word in my vocabulary anymore. I'll just have to hope she isn't reading this post. If you are, baby, you know I didn't mean it like that...I just call you Sweet because you give sugar...LOL

Oh god, I get scuzzier by the second, don't I?
Anyway, let me tell this story before I end up in the doghouse again. I'll start with my post from way back when, otherwise known as Thursday July 17, 2008: 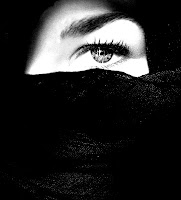 Before last night, I had an awareness, of course, of Sweet’s feminine persona. I knew the other half existed. I’d heard the voice. I’d seen the pictures. We’d spoken on the subject. A lot.

But the experience was still missing. I’d never met the girl face-to-face.

Earlier this week, Sweet mentioned being torn: he wanted to share “her” with me, share her directly. “But why?” he went on to ask. “What’s the point?”

Sweet’s always known how receptive I am to meeting the girl in him. I’ve been very clear on that point. I’m all-embracing.
Yesterday I was out having dinner with a friend. When I got home, there were about 300 messages on my answering machine. “Just calling to say hi…” “just wanted to see if you had plans…” “Just seeing if you’re home yet…” The phone rang even before I was finished listening to them. It was Sweet. But not just everyday Sweet. It was the girl.

“I was out having dinner with Mara,” I told her.
“Oh, that’s great. That’s good…” she began, hesitating. “I just thought maybe we could go to the movies. It’s too late now, but…”

My heart sank. I can see stupid Mara anytime, and here I spent the evening with her instead of with her. Sweet. Her. I didn’t even know her name.

“Hey, who the hell are you, Lady? Here some random woman calls me up, doesn’t even introduce herself, and wants to take me out? Talk about presumptuous!”
Sweet giggled.

“I can tell you that when I see you.”

I’ve always been a fan of immediate gratification and, having missed that evening’s opportunity to see my Sweet in this new-to-me form, I was dreadfully concerned this might be a one-time-only opportunity. He’d expressed his trepidations before. How could I be sure he’d want to unveil his feminine aspect for me again?

I wouldn’t normally make demands on the time of someone who lives so far away from me but this was a special occasion. “Come over, Sweet. Come now.”
At 1:15 in the morning, a beautiful woman appeared on my doorstep. I already knew the person, but the girl was new. We had a cup of tea and chatted. She told me her name, at long last. She was…oh, I’m fluttery-hearted just thinking about her… You know what I was most taken by? Those same old sparkling eyes, of course. Like I wasn’t having enough problems suppressing that question of love…

“Because you’re so much prettier than me.”

Cute story, right? Well, it doesn't end there. I kissed her. We went out to the balcony, teacups in hand. We sat across from each other in my ugly white lawn chairs and we ate chocolate-covered digestive cookies. She wore a green skirt and top, and those kind of heels that have the toe cut out. I set down my teacup and put my head in her lap. She pet my hair. I pet her bare ankle. It was summertime--no need for stockings. 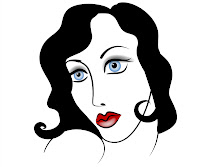 I kissed her lips. Not a big, messy smooch, but more than just a peck. It was the sort of kiss where you press your lips against hers and then you breathe together for a moment, and then release. You gaze into each other's eyes, and you want to cry because you're so overwhelmed by the emotion of the experience.

She went home that night. We talked on the phone first thing the next day, and when topic of our first kiss as women came up, Sweet threw me for a loop. I told her how it made me feel, and you know what she said? "I felt...uncomfortable."

It was the most highly emotional kiss I'd ever experience, and it made her feel uncomfortable.

"I wasn't sure why you did it," she went on. Sweet explained to me that she'd never viewed her rather new female self as a sexual being. She hated that the word transsexual contained the word sexual, because it made her feel like people would view her as some kind of sexual deviant. She wondered if I fetishized her, or if I viewed her as a "guy in a dress" and I got off on that sort of thing.

She said it was okay that I kissed her, that maybe one day she'd let me kiss her again, but I needed to give her time. She wasn't sure what she wanted. It was all so confusing, she told me. We would never have sex--that was for certain. There were so many thing we'd never do.

And now, two years later, I'm pleased to say we have done every single one of those things Sweet said we would never do. I didn't force her. I did take time, and I gave her time, and in that time she came to realize I loved her and desired her for who she was: my gorgeous girlfriend. Not a sex fiend or "guy in a dress," but a woman...with a pleasingly large clit. It comes in handy!

So, that is my first kiss story. It's a sweet story, isn't it? I'm glad a repeat myself.