A little birdie told me you just can't get enough paranormal erotica... so here's more! 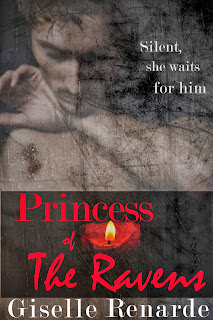 Princess of the Ravens


When a girl child is born to the king's new queen, his sons must flee or face imminent death.  After many years in hiding, Verity tracks down her would-be brothers in a neighbouring kingdom.  As gifts for the twelve men, she plucks twelve enchanted lilies from a witch's garden.  Immediately, the men are turned to ravens.  According to the enchantress' spell, Verity must not make a sound for seven years or her brothers will die.

At once, Verity is found by a prince, who takes her home for his bride.  His mother shows the young girl mercy by confining her to a tower for seven years.  In that time, the raven Benjamin visits her daily.  When they learn to communicate without words, Benjamin reveals a secret that allows their love to blossom.

Will Verity escape the arrogant prince, or be forced to wed?  How can a raven become her saviour?

Together, they counted down the days until Verity would be wed to the prince for whom she held no affection. “It is you I love,” she told her raven boy, in her way.  “How can I marry another?”

“Leave it to me,” he sang, and she smiled.  She knew she could trust him, just as she knew he saw every delectable imagining that entered her mind.  In that moment, she caught herself recollecting that this was the day of her birth, and she was now a woman in every sense.  As soon as the thought struck her, she knew she had conveyed it to Benjamin, and they both fell more silent than they had ever been with one another.

“Where do you go in the night?” she asked him, in silence.  “What do you do when you are not at my side?”

Verity’s heart froze in her chest.  She recognized well the urges in her own body, and she could only imagine how it must be for Benjamin.  He was, after all, a “brutish man” as the waiting maids called them, and he was older, as well.  Must she dwell on the ideas of what he did in the night?  With other women?
***