Nominate Your Favourite Erotica Author for a Ravishing Reads Award 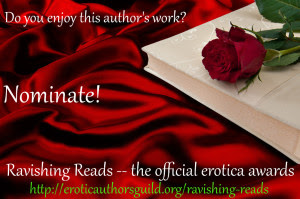 Readers can nominate their favourite author for a Ravishing Reads award. (I know what you're thinking, authors, and the answer is no--sadly, you can't nominate yourself.)

Here are the rules stated in the nominations form:

Rules and Limitations
* You may nominate an author for more than one category.
* Self-nomination, including via your Personal Assistant or street team, is not allowed and will be grounds for disqualification. Anyone else may nominate, including readers, authors and bloggers.
* Duplicate nominations for an author by the same reader/author/blogger will be disqualified. However, you may nominate different works for the same author in the categories involving specific works. Each nomination for a specific story must be submitted separately.
* The nomination phase will remain open until January 7, 2016. Further details on the final voting will be given after all nominations are received and verified for validity.
* All nominations will be vetted by the awards committee for fairness and validation of nominations.


The link to the nomination form is found on this page (click where it says "Nominate"--I missed it on first read): http://eroticauthorsguild.org/ravishing-reads/

You've got until early January to nominate an author and/or their work, so keep the categories in mind while you're reading dirty sex books.

Love you!
Giselle
Posted by Giselle Renarde at 10:30 AM