Am I A Bad Queer? 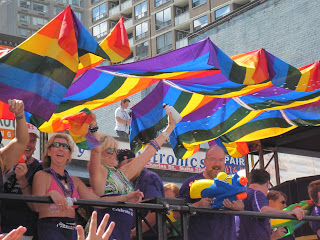 I'm wondering if I'll even go to Pride this year.  Depression seems to be turning my rainbow a little grey these days.  Also, I tend to hyperventilate in crowds and I don't feel comfortable around drunk people.  So a world-class parade is a little tricky for me.

In recent years, I've attended Toronto Pride more to buck the powers-that-be than to celebrate my queerness.  The day our homophobic (and now notorious) mayor Rob Ford was elected, I felt like I was living in a different city.  Who voted for this guy?  I thought this was such a queer-friendly place to live.

That year (two years ago, I think?), the unflushable Mayor Tweedledum upset us queers by refusing to attend Pride.  He didn't even go to the goddamn rainbow flag-raising ceremony at City Hall.  Doood, it's right outside your fucking office!  Are you kidding me?

So I made sure to attend the Pride Parade that year, as a show of solidarity.  I hadn't gone in probably ten years, but I wanted to stand up and be counted.  Political action.  I'm here, I'm queer, I hate Rob Ford.  That sort of thing. 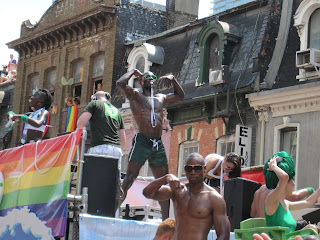 Last week I tweeted about how I sometimes feel like I'm NOT QUEER ENOUGH.  Like I'm a BAD QUEER.  And a big part of that feeling comes from not being a party person.  I don't drink or do drugs.  I don't go to bars or clubs.  There are so many aspects of (what's generally understood to be) queer culture I'm just not a part of.  Hell, I'm not even a big fan of parades!  If I don't get my shit together, I'm gonna be kicked out of the club.

But I yams what I yams: a quiet queer.

This Pride, maybe I'll just go to the street festival.  I like the supporting queer vendors.  I like being around other queer people.  Everyone's so cheerful all weekend.  Total strangers wish you Happy Pride just for walking by. It's nice.

So, am I a bad queer if I don't go to the Parade? I feel like I am.  But the route gets packed and I'm so short I usually can't see much anyway. Last year I slathered on SPF 85 and still got sunburnt. 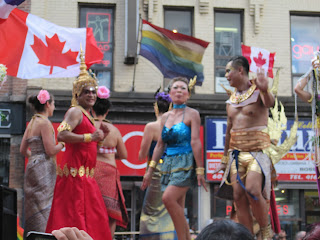 On the other hand, I love the parade's inclusiveness and diversity--the very qualities our mayor would probably like to wipe from the face of our city.

Families come to Pride.  All kinds of people do.  Last year, I stood next to two middle-aged men in turbans and an elderly Asian woman.  Man oh man, you should have seen that lady jump for joy when the Trojan guys started tossing out condoms!

Damn... I think I just talked myself back into going.

Posted by Giselle Renarde at 10:05 PM