Cougar or Not, Here I Come! 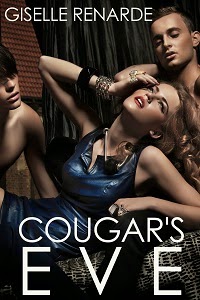 For you, there's COUGAR'S EVE.

Cougar's Eve is a book about a robot jungle cat trying to make it in the big city. Just kidding! It's about a resort where older women hook up with younger men (and the pretty receptionist too, if they're lucky) on New Year's Eve.

If you're looking for a book to share New Year's Eve because your brother's hogging all the puzzle pieces, you can buy Cougar's Eve as an ebook or in print from such retailers as:

And from the publisher, eXcessica: http://www.excessica.com/books/index.php?main_page=product_info&cPath=7&products_id=794
Posted by Giselle Renarde at 12:06 PM