Tell me what you're up to, Tonya Kinzer!

Hello, my friends! Just a heads-up before we begin today's interview: I won't be around much this week, so if you don't see me tweeting as much as usual, there's nothing to worry about.

Okay, interview time! On with the show! 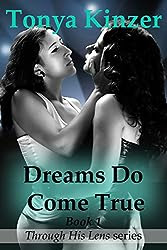 Giselle: Tell me what you're up to, Tonya Kinzer!

Tonya Kinzer: Doing promo for my latest release on Jan 23, Dreams Do Come True, bk 1 in the lesbian romance series, Through His Lens about a photographer and the models in his circle.

Giselle: Got a new book out? What's it called?

Giselle: Tell me about it.

Tonya Kinzer: Sandi’s career has taken off as a model and she loves her photographer…just not the way he wished she did. The men of her past abused her one too many times and the one woman in her life is being treated the same way. Can she get Kiera away from her abusive relationship and show her what true love really is? The two of them have been roommates for two years where Sandi has been forced to comfort her each time she’s been abused. Determined to put a stop to the abuse, Sandi has to show Kiera a new relationship already exists for her and that love can be better in HER arms.

Giselle: Where can readers buy it?

Giselle: Where can readers find you?

Email ThisBlogThis!Share to TwitterShare to FacebookShare to Pinterest
Labels: interview