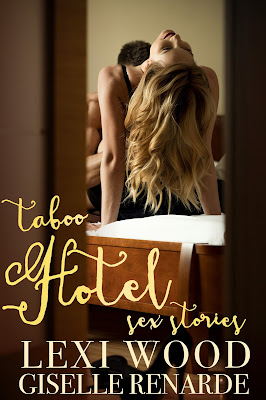 At a hotel, anything’s possible. We can do things we would never dream of at home. We can even surrender to forbidden temptations…

Leave your inhibitions at the door. It’s time to enter the Taboo Hotel!


READ AN EXCERPT from one of Lexi's smutty barely-legal stepdaddy stories:

“I want you to do things normal teenagers do,” Walt went on.

“But I’m not a normal teenager and I don’t want to be one!”

That’s when Walt did something he’d never done to her before: he placed his hand on the curve of her bum and stroked it gently.

Did he think she was family pet? Why was he doing that?

Her impulse was to tell him to stop… except every time he ran his warm hand over her bum like that, the pulsing sensation built in that forbidden place.

She knew it was wrong, but it felt so good.

What would her mother say?!?

“No,” she spat. “Normal teenagers are idiots. They drink and do drugs and kill all their brain cells, and they don’t even care!”

“There must be something,” Walt asked quietly, encouragingly. He hadn’t stopped stroking her bum. “Can’t you think of even one thing normal teens have that you… want?”

Posted by Giselle Renarde at 5:30 PM