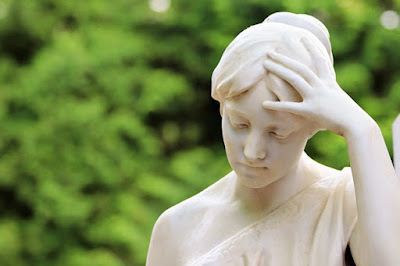 The more I write about grief and depression, the more followers I lose. So why do I do it? Why do something that seems, on the surface, pretty bad for my writing career? Because I'm finally realizing there's truth to that old saying I never used to believe: if your work helps just one person, it's worth doing. Even if fair-weather fans bail, I'm here for YOU, you dear, darling ONE person who needs this post.

Yes, it might be a bummer! Read it if you want, don't if you don't. I'm not forcing anyone. Do what's right for you.

I want to talk about Mother's Day, because it's tomorrow, and it's on my mind.

As you probably know, my grandmother died six months ago. My cousin died just a couple months before her. I think that's all the background you need.

This'll be the first Mother's Day since my grandma's death, and it's hitting me hard. Not just my grandmother's absence (and I do miss her hugely), but the feeling that my family is disintegrating without her. She was the glue. She was the matriarch. Without her, how do we hold together?

For the past ten or twenty years, the whole family's been assembling at my grandmother's house on Mother's Day. It was never a planned event, like Christmas and Grandma's birthday, which were the other two occasions on which you could be sure to see all the aunts, uncles, cousins, babies. Everybody just sort of showed up at Grandma's house because she was the mother of the family. Where else would we spend Mother's Day?

My grandmother never wanted a "final resting place." She didn't believe in that sort of thing. So she doesn't have one. I really wish she did, because I want to visit her, especially on a day like Mother's Day. Although, that's the whole reason she didn't want a gravesite: she wouldn't be there, so why would we waste our time going there to see her?

Why? Because there's nowhere else to go...

I watched this TV show called Seatbelt Psychic, where a ride share driver who is also a medium does readings while he's driving people places. One thing he said was that our dead loved ones are always around us. It really upset me to hear that, because all I could think was: if they're around me, why can't I feel them?

I can never feel them. All I feel is alone.

Perhaps I shouldn't feel alone. I do have family. I have my mother and my siblings. That's who I'll be spending Mother's Day with. And I do feel fortunate, especially as a queer person, to have a solid relationship with my family. I know I'm lucky to have more siblings than a lot of people do, these days. A big family is nice. That's why I want to spend special occasions with my many, many aunts and uncles and cousins and their children.

After the death of my cousin this summer, I found out that he looked forward to our family gatherings as much as I did. They were a high point on his calendar. You make so many assumptions about other people's lives, you know? You assume they've got all this cool stuff going on. I'm sure people think that about me, too, that I've got this cool queer life doing cool queer stuff. The truth is that I look forward to returning library materials. I look forward to chatting with friendly cashiers. I don't have much going on, and depression steals your will to seek out new things to do.

Sweet asked why I don't organize a big family event for Mother's Day, if I want one so badly. It's a nice idea, but it would have required more energy than I currently have available. Took me two weeks just to pin down my siblings. Maybe next year I'll be more emotionally stable. Maybe then I'll be able to take initiative. Then again, part of me just wants to be a kid (a 40-year-old kid...) who shows up at the party and doesn't have to do any of the organizing.

I love my family. I don't want us to fall apart. But, my mental health being what it is, I don't know how to keep us together.

Posted by Giselle Renarde at 8:00 PM

Email ThisBlogThis!Share to TwitterShare to FacebookShare to Pinterest
Labels: depression, Holidays, How to Fail Miserably at Everything, life, relationships