I've barely been at my computer this week, so Donuts & Desires has been sorely neglected. Poor Donuts! Poor Desires! But we're back with this week's Sapphic Signs post: 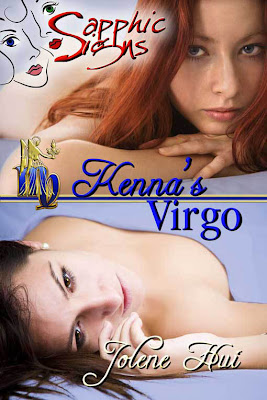 Kenna's Virgo
by Jolene Hui
Shortly after Maggie graduates from college, she meets Kenna, a beautiful redhead. Mere moments after their meeting, Maggie reads her Virgo horoscope that encourages her to try new experiences and to “open your heart.” She reflects back on her life and decides she’ll take the horoscope to heart and attempt to come out of her shell. After outing herself to her mother, Maggie moves in with Kenna as her roommate. Even though Kenna is in a relationship and Maggie starts to date another woman, Maggie still has feelings for Kenna that just won’t go away.

I set down my spoon and stared straight ahead to keep the wave of nausea from sweeping down into my stomach. Emma didn’t wait. She grabbed my elbow and led me to the bathroom where I lost everything I’d eaten. The wine burned in my throat. I relaxed on the rug and stared at the ceiling. When I finished emptying the contents of my stomach I sheepishly walked out into the dining room area.

They had set up a pillow and blankets on the couch in the living room. Kenna led me there. Emma was still cleaning up.

"Just relax on the couch and don’t worry about it,” she said.

I snuggled into the couch nest they’d made for me and closed my eyes. I could easily fall asleep there, but I kept myself awake. Emma and Kenna joined me, and we talked about everything that came to mind. I talked about how I missed going to the waterpark in the summer. Emma confessed she felt attracted to David Beckham. Kenna said she missed all her pets that had passed away throughout her lifetime. My stomach began to settle as we chatted like old friends.

Kenna’s teeth were perfectly straight. Her body was slim – her clothes hitting her in just the right spots, just like the servers I always adored. Under her apron was a flowing pink blouse and Capri jeans. She must have forgotten to take her apron off after she finished cooking. She wore a bronze bangle on her wrist with a necklace that matched. I kept my eyes on Kenna while our conversation went from here to there. Somehow in the depths of the evening our conversation had turned to sexual experiences.

“My first time was with an older woman,” Kenna told us. She put her mouth around her ginger ale straw and sucked firmly but seductively. I sipped silently while she relayed the story.

“She was about thirty five. I was sixteen. I was a nanny that summer. She was the mother of one of the kids’ friends. She stayed to help me watch the kids during a sleepover. After the kids went to sleep we had our own sleepover. A movie was on but I wasn’t watching it. I could feel her breathing on my neck. She smelled like fresh lilacs, and her skin looked so soft.”

“This sounds like a made for TV movie,” I interjected.

Emma laughed with me. Kenna rolled her eyes and continued her story. “It’s all true! She was married to a wealthy man who traveled a lot. She wanted some hot, young, action!”

“That’s a movie I’d tune into!” It didn’t take me long to feel comfortable around the two women.

“How about you, baby girl?” Emma moved the spotlight to me.

I blushed and sipped my ginger ale.

“You’re still a virgin!” shouted Emma. Kenna smiled and sucked on her straw.

Kenna's Virgo is Available from Torquere Press!
Posted by Giselle Renarde at 7:39 PM