On the Overwhelming Task of Being Single, "Serving Him" and The Golden Ruler 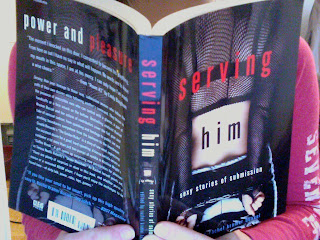 There's only one thing that gets me down about being single* (*single, in the sense of partnered but unmarried and living alone) and it might seem like a minor point.  It certainly isn't something I ever anticipated, but every time it comes up, it hits me--and it hits me fucking hard.

It's the bills.  Visa bills, phone bills, internet, cable, on and on...  So many goddamn bills.

And, actually, it's not the bills themselves.  It's not the act of paying bills.  I'm good at that.  It's the anomalies that overwhelm me.

Last night, I lost it when I opened my Visa bill and found charges on there that were waaaaay out of whack.  This happens maybe three times a year--the phone bill jumps for no reason, the cable bill gently slides up out of my budgetary region, and I know I need to make a call.  I need to set things straight.

Don't cry for me, Argentina.  The truth is, there are worse things in the world.  But, growing up, it always pissed me off that my aunts (on my father's side, not my mother's) made this bleak assumption that I would marry some dude who would work a job so I could stand naked in a kitchen, or however that goes.  It pissed me off because I knew from a young age that a) I was queer, and b) I was feminist.

I didn't need some man to pay the bills.  I could take care of my own damn self, thank you very much.

And I have.  I've taken care of myself for... crikey, a lot of years.  Put myself through school, got an okay job, quit it to be a full-time writer... worked, cooked, clean, brought home the bacon, paid the bills... I've done it all.  I've proven to myself (and all those aunts who don't associate with me anymore anyway) that I'm perfectly capably of supporting my own little household.  I'm independent.  That's all I ever wanted to be.

Until that bill comes in the mail, and I need to call Bell for the fourth time, and I start feeling like I'm going to hyperventilate because no god not another verbal boxing match with customer service...

That's the state I was in when I wrote my story The Golden Ruler, which appears in Rachel Kramer Bussel's D/s anthology Serving Him.  It's pretty obvious, when you read the story.  In that headspace, I would have gladly given over all my personal power to anyone who would advocate on my behalf.

Maybe that's what's at the heart of this matter: I want someone to advocate for me--someone who will stand beside me always and take over when I'm too exhausted to go on.  Maybe, in my heart's mind, that's what marriage represents.  That's what I'm sad to lack: a personal advocate, an ally in all matters.  Someone who will call the utilities when I've had enough.  A true partner.

The Golden Ruler appears in Serving Him: Sexy Stories of Submission.  You can read @raquelita's take on it here: http://www.lustylady.blogspot.ca/2013/02/begging-to-be-spanked-in-golden-ruler.html

Posted by Giselle Renarde at 3:07 PM