Every month I post the top-selling Giselle Renarde Erotica print books, and September's bestseller was clear: 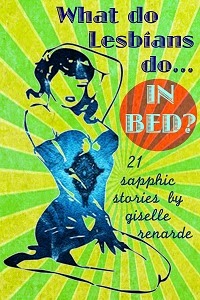 Have you ever wondered what lesbians do when they get together? Is it all fingers and scissors and lips between legs, or is there WAY more to the slippery story of lesbian sex?

In this hot new anthology, enjoy twenty-one explicit tales of lesbian love. From shoe fetish to opera gloves, sex in public to quiet winter mornings, even connoisseurs of fine girl-on-girl action are likely to discover a new idea or two in this sexy new collection.

Whether you can appreciate this book’s title ironically or you’re authentically curious about what girls who love girls do in bed (or in parked cars or at the office or in a church basement or in a restaurant bathroom), grab a copy today and get in on the nitty-gritty secrets of lesbian sex.

Honorary mentions go out to: 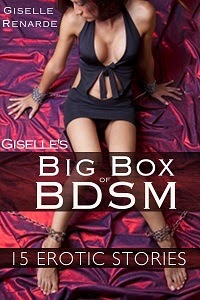 What will you find between the covers?

Tree Hugger: When the new hotshot lawyer at Navina’s firm invites her out for a hike, he comes equipped with… bungee cords? Only a cute guy like Riley could get away with tying her, naked, to the nearest tree. She’s never been much of a tree hugger, but Riley’s rough hands might change her mind.

An Appreciation for Beautiful Things: Dell's mother-in-law is convinced he's gay, but that doesn't bother him. He's got nothing to prove. Tying up his wife, spanking her, making her scream for mercy--he doesn't do these things to prove that he's straight. He just loves taking charge.

The Invisible Husband: In Greta's opinion, a good husband is like a well-trained dog: you shouldn't see or hear him, except on command. That's not to say she doesn't take good care of her pet. He even gets to sleep in the big bed when he deserves it...

Forgotten Bodies: After three kids and many years of marriage, Susan’s lost her libido. She’s afraid if she doesn't satisfy her handsome husband’s desires he’ll find someone else who will. When Anthony surprises her with a spanking, will Susan find a new route to arousal?

The Sweetest Burn: Lucinda can’t stand to feel viscous fluids dripping down her skin. Too bad! For Chef, a recipe is never complete until it's mixed with the salt, sweat and oils of her skin. Today's sweet sauce is mole poblano, a Mexican chocolate chili that will set her ablaze. 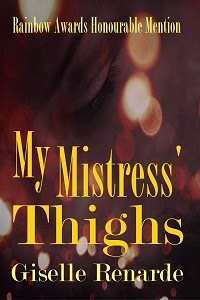 A cross-dressing cowboy, a post-war pin-up, and a wolf in grandmother's clothing all find a special home in My Mistress' Thighs.

From the timid closet dresser of Love in the Time of Instant Messenger to the post-op rodeo queen of Leslie Goosemoon Rides Again, all who seek love find it in the world of Giselle Renarde Erotica.

Posted by Giselle Renarde at 12:50 PM