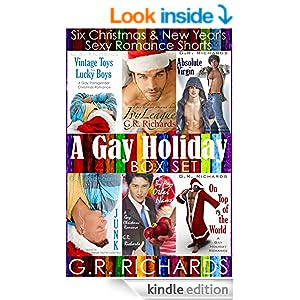 A Gay Holiday
by G.R. Richards

Just in time for the holidays, grab this great new anthology of six gay Christmas and New Year’s romance shorts by G.R. Richards!

Folksy storyteller Patrick O'Hara is facing another Christmas alone until his favorite cam guy shows up at his lonely hotel room.

Brett's got the world's noisiest neighbors. When he escapes to the stairwell in search of silence, the last thing he expects to find is... Santa?

When Devon invites his fellow student Shiv to spend Christmas at his family’s farm, will they realize there's more to a relationship than sex?

Randy’s mom has been so supportive of his transition from female to male he decides to sell some vintage toys to buy her a great gift. What happens when antiques dealer Max discovers his best-kept secret?

Max is too emotionally attached to a lot of his “junk” to sell it, and Randy's starting to think material possessions mean more than he does. Can Max convince him otherwise in time for Christmas?

When Turner shows up on his former teacher’s doorstep on New Year’s Eve, will Mr. Fairfield be waiting for him… or does Neville have a New Year’s date of his own?

Buy Now from http://www.amazon.com/Gay-Holiday-Box-Set-Christmas-ebook/dp/B00R334AQM/ref=dondes-20
Posted by Giselle Renarde at 11:17 AM