Tell Me What You're Up To, Lilith Lo! 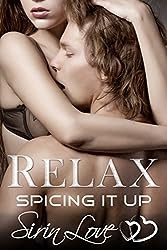 It's "Tell Me What You're Up To Tuesday." Sorry I missed last week, by the way. I was out of town and thought I'd post when I got home at 4 in the afternoon. Walked through my door, cleaned out the litter boxes, crashed on the couch. That was it. I was out for the night.

Giselle: Tell Me What You're Up To, Lilith Lo!

Lilith Lo: Morning Giselle :) I can feel the heat from Canada all the way down here! Fabulous work.

On the stove - is a mess I need to clean up from when I made coffee this morning and spilled the sugar. :)

The second series is Vespa's Sapiens. Book 1 is available now. A sci-fi series that puts the Sexy in World Domination.

On the Roundabout - I have a list of things to do that's a mile long. Every day I work morning to night and somehow I've only managed to slip further behind!

Giselle: Got a new book out? What's it called?

Giselle: Done. Now tell me about this book LOL

Lilith Lo: A couple trapped in a sexually repressed marriage sought out sex therapy - and then discovers a new passion while putting their counselor's suggestions into practice.

Giselle: I love couples trapped in sexually repressed marriages! Where can readers buy it?

Giselle: Where can readers find you?

Posted by Giselle Renarde at 7:26 PM

Email ThisBlogThis!Share to TwitterShare to FacebookShare to Pinterest
Labels: interview