Where to begin? There's so much I want to tell you.

I'll begin with the novel. I found it on my computer, partially completed at 200 pages and 60,000 words.  I have some memory of writing it while I was still working in business--before I had any intention of becoming an author, as far as I recall.  But memory is an iffy thing.  I can be wrong. I'm often wrong.

If I wrote a huge chunk of a novel before I made my living as a writer, I must have done it for a reason.  That reason is lost on me now.  To preserve a time in my life?  To preserve the salience of certain events?  I don't know.  All I do know is that I started revising this book and it sucks monkey balls.

But you know what? Even monkey balls can be fixed. And now I want to make a joke about this chimpanzee I saw in a documentary whose vasectomies wouldn't take... but I won't make that joke. Instead, I'll admire what I was trying to accomplish over a decade ago, when I wrote my life down--or some version of it, at least.

This book is autobiographical fiction, but if I were to sit down right now and try to delve back into myself as a teen and young adult, I just wouldn't be able to. I've outgrown the angst.  It's so hard to access that side of yourself when it feels so distant, but when I wrote this book (I must have been in my mid-twenties at the time) those years were obviously close at hand.

So I'm thankful my former self took the time to write my monkey balls book. Sure the writing is terrible, but the heart of it's there. It'll take a lot of time, but I can work with what's on the page. That's the project I'm devoting my time to, these days.

You might have noticed I added a feature in the sidebar. Over there ==>

My New Year's resolution was to read more, because I firmly believe a big part of the writer's job is to read. Mission accomplished. I'm pretty sure I've already read more books in 2015 than I did in the whole of 2014. Well, maybe not quite, but almost. I'm doing well.

I also figured I would share what I was reading with you. I'm accountable to you. You can see what I'm doing. Giselle is nothing if not transparent.

Except, if you're reading this blog post before I change the cover in the sidebar, the book you're seeing actually isn't the book I'm reading.

When I spotted The Postmistress at the library, I was so excited because I remember when it came out and there were subway posters for it and the cover looked so pretty and I was like, "Yay, it'll be like Lark Rise to Candleford and I miss that show so much."

And then I opened it and started reading, and from the very first page... IT WAS MY MONKEY BALLS BOOK. I kid you not.

Not talking content here, just quality and style. It begins with a preamble because the author obviously didn't have the confidence to be like, "Here's my story. Here it is. Right now." Nope, she needs to kind of explain WHY this story has to be told, or why you might be interested in reading it.  I know this because that's why my monkey balls book began with a similar preamble, which is now dust.

Readers don't need to be told why they might want to read the novel via some cutesie prologue. Readers picked up your book because they wanted to read the book. So just get on with it.

You know I don't like to trash other authors' works because it's bad for business and it makes you feel pretty shitty if you are that author, but The Postmistress is a New York Times bestseller and the prose is just... it's just not good, guys. It's sadly bad. It's so bad it made me sad.

Books that bring out my inner editor go back to the library. I never used to give up on books. I felt like once I'd started them I had a duty to finish reading. Not anymore.

What put me over the edge with The Postmistress was the messy POV shifts and head-hopping. It irked me so much I finally threw my bookmark on the floor, closed the book and said, "That's it. I'm done." And also, "Who edited you?"  This stuff would have been so easy to edit out. It's really jarring, and it's just left in there to jar you. It's like if I'd found my monkey balls book on my hard drive and just went, "Hey, let's publish this! Right now!" 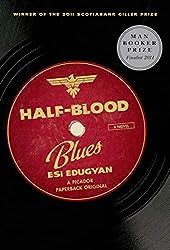 Basically what I'm saying is that books that appear in the what I'm reading feature in the sidebar are just that--books I'm reading. They're not necessarily recommendations.

Although I have a feeling the book I just started (Half-Blood Blues by Esi Edugyan) WILL be, because the writing is fucking brilliant. Lawrence Hill thinks so too. Although his quote on the cover says, "A truly beautiful novel." Mine would be more like, "Kick-ass motherfucking gorgeous writing like I've never seen. *high-five*"

...which is probably why I'm never quoted on book covers...

*Opinions expressed at Donuts and Desires are those of Giselle Renarde and do not necessarily represent the views of her cats.*

Posted by Giselle Renarde at 11:48 AM