Last year, when I went to the cottage with my family, I filled my blog with other writers' books. It made me feel good to showcase the works of other authors, so I'm doing it again. They didn't ask me to and I didn't tell them I was doing it, but that's what makes me happy about this whole thing.

When people think you're a big deal (I'm talking mostly PR people, here), there's a lot of clambering at the gates of your blog. They want in. They want you to feature their clients. It kind of makes me laugh, because if they saw what I earn as a writer they definitely wouldn't think much of me. And, as I've said many times, I'm not a media outlet--I'm just an author with a blog. I'm not looking for content.

But I've been ruminating over this, and the fact that PR people want their clients' books (and other various products) featured here speaks more to the quality of YOU than of me. They want YOUR eyes on the prize. I'm just the middleman.

So kudos to YOU for being such in-demand readers. High-fives all around!

And here's today's feature--a book by my twitter pal and fellow Canadian... 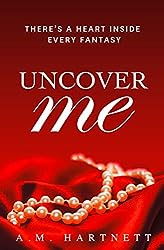 Uncover Me
by A.M. Hartnett

But Carrie finds it difficult to treat their relationship as casual. Terrified of heartbreak, she breaks off her affair with Brendan. Her previous relationship left her in tatters and she’s too scared to take such a chance again. Brendan endured a broken marriage so she’s not alone in her confusion and reticence. But can Carrie ever hope to be more than his fantasy girl?

Email ThisBlogThis!Share to TwitterShare to FacebookShare to Pinterest
Labels: books