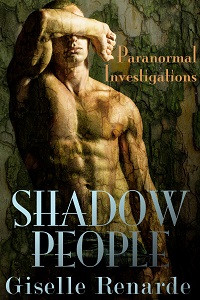 This week's My Sexy Saturday theme is Late Summer Sexy, which suits my novelette Shadow People pretty perfectly. It's summer in the North, and my paranormal investigator is approaching her last days in this world. In THIS world. The shadow world... well, that's another story.

Actually, it's THIS story: Shadow People.

Traditional stories tell of Inuit who have crossed into the shadow world. No one has ever returned…

Paranormal Investigator Anna Fairclough hasn't had much luck getting interesting assignments. When her boss, Gentle Geoff, picks her to investigate the existence of the elusive Inuit Shadow People, Anna jumps for joy. When he decides to come along for the trip, she's over the moon!

But when their attempts to find the legendary Shadow People fail at every turn, Geoff doesn't seem so gentle anymore. In fact, he blames Anna for their failure. Will the novice parapsychologist ever discover the secret of the Shadow People? And have rumours of their shyness been greatly exaggerated?

Since it's My Sexy Saturday, I'm sharing a 7-paragraph excerpt:


“The Shadow People, or Tarriaksuit as they are known…”

“Read in your head,” Sully interrupted.

Anna batted her lashes, then bobbed her head like a sardonic I Dream of Jeannie. “Yes, master.”

The Shadow People, or Tarriaksuit as they are known to the Inuit, are elemental beings described in the mythological systems of the Canadian North. Shadow People are commonly believed to inhabit a world parallel to ours, existing beyond the realm of human sense perception. Disembodied speaking or laughing are often attributed to these beings, as are sounds of footsteps in the distance.

Historically, only the most intuitive residents of the North have felt the presence of the allegedly shy Shadow People. Traditional stories tell of Inuit who have crossed into the other world. No one has ever returned. No solid research yet exists in the annals of parapsychological investigation to confirm or deny this type of report.

“This actually doesn’t sound so bad,” Anna said, more to herself than to Sully. She didn’t think he’d bother listening. “Did you read my Shadow People assignment, Sully? My research could be ground-breaking.”

“If your investigation yields any results,” he muttered. “And that’s a big if.”


Shadow People is available from: