Another day, another new release! At the rate my books hit the market, you'd think I'd be rolling in dough by now. HA!

I won't bore you with the story behind Stepbrother Summer (mostly because I already bored you with it two days ago: http://donutsdesires.blogspot.ca/2015/08/oh-what-difference-step-makes.html). Instead, we'll get right to the good stuff. 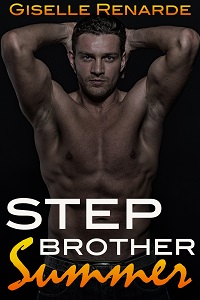 It’s forbidden, it’s wrong, and Adam will never look at his stepsister the same way again!

Adam and Sheree are stuck at a remote cottage all summer. No internet access, no cable, no cell reception. They’ve both got sweethearts in the city, but Sheree’s worried about her boyfriend’s wandering eye. When she convinces her stepbrother to take sexy snapshots for Ricky, Adam can never unsee the taboo image of his stepsis in a string bikini… and OUT of one!

Guilt is eating him alive by the time Sheree’s boyfriend and Adam’s girlfriend arrive for a surprise visit. Both relationships seem doomed, but Adam would never have imagined he’d end up fighting for his life—and his stepsister’s love.

Stepbrother Summer by Giselle Renarde
A steamy stepbrother romance for adult eyes only!

The excerpt I'm going to share is actually the first 7 paragraphs from Stepbrother Summer. It'll give you a good idea of just how smutty this book really is:

“Careful with that camera. It isn’t waterproof.”

The camera was the last thing on Adam’s mind. “This is gross, Ree. Seriously.”

“Gross how?” Sheree knelt on the rock face, which sparkled at the surface of a silent lake.

“Uhh… do I really need to explain? You’re wearing an ugly-ass bikini, posing like a pin-up model, and I’m supposed to take pictures? That’s pretty fucked up.”

Sheree rolled her eyes. “No it’s not. Stop being a baby.”

“I’m not a baby,” Adam grumbled. “I’m just not a total perv like someone I know.”

“Jesus H. Christ, you’re just taking a few pictures. It’s not like I’m asking you to fuck my ass and spank me with a banana.”

Stepbrother Summer is only $0.99 this weekend, so snap it up!

Posted by Giselle Renarde at 10:27 PM